Weather for this weekend

Lots of rainfall forecasted for the weekend and next week.

Good news is that weather models aren’t letting us down and we are still expecting lots of rainfall over the country starting tonight in places and over the weekend moving into next week.

On Wednesday and Thursday next week we could see a strong cut off low over the country which could lead to even more rainfall over all 9 provinces. Most rainfall will be over the Free State, Lesotho and KZN.

This forecast can still change but we are seeing consistency in the models. 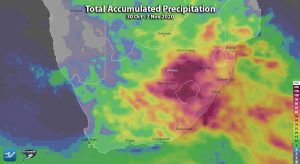 News: SASSA will make double payments of the special relief grant this week.

Here’s what voting day under lockdown could look like

Dlamini-Zuma changes lockdown laws – to allow fans back in stadiums!

Michelle Ave in Alberton has a new name

There’s R44.9 billion of unclaimed pension funds in SA – how to find out if you’re owed anything