South Africans are facing another weekend of power outages after Eskom announced that it would implement stage 2 load shedding from 12 pm on Friday until Sunday evening.

The state-owned power utility has been dogged by failing equipment due to poor maintenance for the past 15 years, resulting in frequent periods of load shedding as generation units either break down or are taken off the grid for maintenance.

Last month energy regulator Nersa approved Eskom’s request to recoup R6 billion from consumers through tariff increases. It is estimated that electricity tariffs will be hiked by just over 10% to meet the utility’s revenue target during 2021/2022.

Eskom has previously argued that one of the major reasons for its financial woes is that Nersa has consistently awarded it lower tariff increases than it has applied for. The regulator insists that it tries to strike a balance between Eskom’s interests and those of power consumers.

Last year, the High Court set aside a series of Nersa’s decisions, calling some of them “procedurally unfair” and “irrational”.

Despite heavy rains in parts of Mpumalanga, Limpopo and KwaZulu-Natal last month as a result of tropical cyclone Eloise, the utility was able to maintain its operations without the need to cut power to consumers. 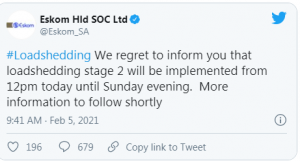 The “Alice in Wonderland” clothing gazette

News: Will the EFF be held accountable?