South Africa is struggling to get recruits in these TEN industries

Many skilled citizens pursue a path towards emigration to start their new lives abroad.  A study from Xpatweb also highlights ten key professions that are struggling to recruit qualified workers, potentially causing a situation in which large numbers of educated and very skilled people leave South Africa to live and work in another one where pay and conditions are better.

The nations that are most appealing to our ‘expats’ perhaps don’t come as a surprise. The usual names, such as the UK, Australia, and the USA, remain amongst the favourite destinations for South Africans in exile. However, the emergence of the Asian market is drawing some of our wealthier want-aways to places like Japan and Singapore:

The top destinations of choice for South African expats:

Emigration has been identified as one of the influential factors causing a ‘brain-drain’ in some industries across SA. Engineers are in short supply, topping the domestic list of in-demand skills. IT specialists and foreign-language speakers follow shortly behind, as Artisans and media/marketing professionals complete the top five. 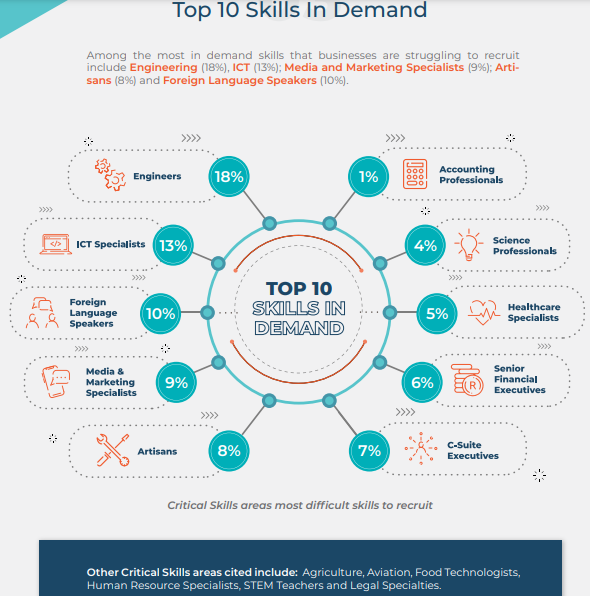 Although nursing doesn’t appear on the list of jobs with critical shortages just yet, Xpatweb predicts that will change ‘within the next few years’, as a high percentage of workers plan to leave the profession soon:

“Statistics released by the South African Nursing Council reveal that as many as 48% of the country’s nurses will be exiting the profession due to retirement in the next few years. It is alarming to note that the uptake of new nursing recruits into the SA healthcare sector will not be sufficient to replace those who have retired.” | Xpatweb

The study also reflects what our ‘new normal’ may look like after COVID-19. A majority of South Africans are willing to stay on these shores – while working for international companies that don’t have a physical presence in the country. These ‘remote jobs’ may keep citizens in the Republic – but they also have the potential to further accelerate the brain-drain:

“In total, 57% of respondents indicated that they would be willing to work remotely for a company that did not have a physical presence in their home country. This could further accelerate the skills brain-drain without citizens even leaving the country. This may be good news for the fiscus, but it is a concern for SA businesses…”

“They will now have to compete on this new virtual plane to retain the interest of local skilled professionals for whom it is becoming increasingly easy to be globally mobile while working remotely from home.”

Expert on AKA ‘tell all’: Body language tells a different story