The season for snakes has arrived.  In South Africa, the peak season for snakes runs from September to November and can sometimes last well into February in hot conditions.  This is the breeding season for snakes.  During the breeding season, snakes tend to be more active as they search for a mate.  The most common snake in the South of Gauteng is the Rinkhals, which is considered to be medically significant.  The deadly Mozambique Cobra is also reported frequently with rare sightings of the Pofadder having been reported over the years.

Most snakes you are likely to see will be harmless and poses no threat to humans or pets.

Out of the 170 or so species of snake found in South Africa, the Rinkhals is considered one of the most dangerous.  This fast moving and often aggressive snake is very venomous and can spit up to 3 meters, often aiming for the face of its ‘target’.  Johan Marais, the CEO of the African Snakebite Institute, said the Rinkhals (Hemachatus Haemachatus) is mostly a grassland inhabitant.  “It is fond of wetlands where it feeds on frogs. When threatened it is very quick to disappear down a hole, but if cornered it will generally stand its ground, form a hood and is quick to spit, flicking the head forward in doing so. The Rinkhals is also quick to play dead with their body turned upside down and the mouth hanging open.”

The snakebite institute says that these snakes vary in colouration with individuals from the highveld usually being grey to blackish, with two or three white bars on the chest. “These colours are common throughout most of the Free State but as one gets to Clarens they are more banded, often with bright orange. Those in the KZN Midlands and the Cape Provinces are usually fully banded,” says the institute.  The average length of the Rinkhals varies between 80cm to a 100cm, although some have been recorded at over 1,5 meters.   “While the Rinkhals can certainly be considered as one of the deadliest snakes species in South Africa, a death hasn’t been reported in more than 40 years. In light of this the Rinkhals is certainly not in the same class as mambas, cobras or even the Puff Adder,” Johan Marais explained.  “Anyone who is bitten by a Rinkhals is advised to go to the nearest hospital immediately.  If a pet is bitten take them to the vet immediately. Do not bandage the wound. If poison ends up in your eyes you are advised to rinse it out immediately and go to a doctor so that the eyes can be examined.”  Anyone who spots a Rinkhals is advised to immediately take five steps backward and contact a snake catcher.  There are more than 60 snake catchers listed on the African Snakebite Institute’s website. 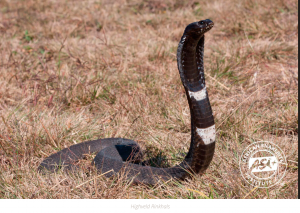 What this means for you?  Residents in areas like Meyersdal, especially adjacent to larger areas of open veld, areas close to wetlands such as parts of Verwoerdpark, Katlehong, Vosloorus, Thokoza,  Brackenhurst, and Brackendowns, and any area where there are larger open fields or wetlands close to houses should keep an eye out for the Rinkhals.  Sightings in all of these areas have been reported.  In the South of Johannesburg, especially Kibler Park and Eikenhof, there are very frequent sightings of these snakes.  Eikenhof resident and well known operatic tenor Coert Grobbelaar, has had many alarming engagements with the snakes, every year since he returned from Germany.

Alberton City helping those in need!