SABC 2 has announced that episodes of Muvhango and 7de Laan, will each be reduced to just three per week, each.

Starting from 5 April 2021, 7de Laan will air on Mondays, Tuesdays and Wednesdays. While Muvhango, will also air between Monday until Wednesday, however the move will only come into effect in August.

The schedule changes for the channel’s two flagship soapies, are to make way for new programming on the line-up. 7de Laan will be replaced by a new show called Die Sentrum, which will occupy its 18:00 timeslot on Thursday and Friday.

In a statement, 7de Laan, which is produced by Danie Odendaal Produksies, confirmed the news and has guaranteed viewers that it has no plans on abandoning them.

“We wish to reassure you of our unwavering commitment to continue producing relevant, informative and entertaining content. Our upcoming storylines are filled with inspiration, humour, drama and love matches that’s sure to get you talking,” the show said. 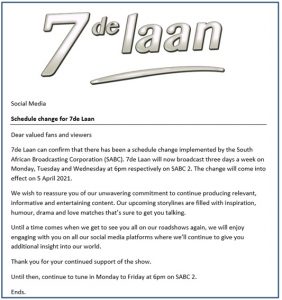 The second season of Giyani will then takeover Muvhango’s 21:00 time slot. The first season of the telenovela, which tells the story of two feuding families, premiered in April 2019.

In December 2020, nearly 4 million people tuned into Muvhango, making it one of the most viewed soapies in the country. The SABC has said however, that despite this, audience consumption patterns are changing, which they need to respond to.

“The channel will continue monitoring programme performance on a regular basis, analysing the relevance and strength of all properties, including these two, and based on the strategic role of the content, decisions on the future of the properties will be made,” the SABC’s acting spokesperson Mmoni Seapolelo said.

Improve Your Chance Of Getting A Job During Lockdown

Taxi drivers appeal to Government to make “sacrifices” for them