South Africans have responded with humour, excitement and even a bit of shade to news that the Vaal Dam is full for the first time since 2017.

“With the strong inflows, the integrated Vaal river system continues to recharge, with the example of the Vaal Dam reaching 100% at 5pm on Monday, February 8.

“The dams in Gauteng also continue to recharge considerably, but the main source of contentment is based on the fact that the catchment, whose tributaries feed the integrated Vaal river system, have had hefty recharges. Even the two dams in the mountain kingdom [Lesotho], Katse and Mohale, are recovering.”

The dam last reached 100% capacity three years ago and, according to a tweet from Johannesburg Water, six years before that.

Many had been watching closely as the dam levels rose after recent heavy rainfalls and took to social media on Monday to celebrate like we had won the World Cup.

From the hilarious to the spicy, here are just some of the reactions: 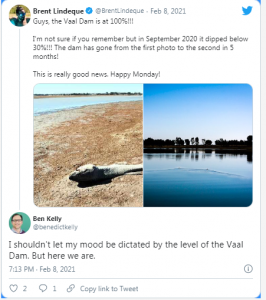 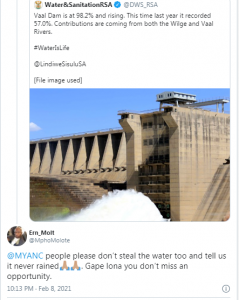 ‘BOTH ME AND THE VAAL ARE BEYOND CAPACITY’

‘SO WILL WE NOW PAY LESS FOR WATER?’ 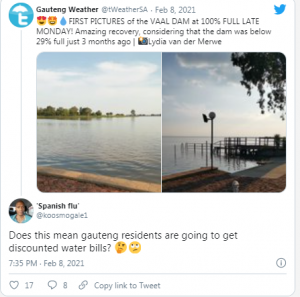 News: Dlamini-Zuma cannot promise she will not reinstate ban on cigarettes

Renaming alert: This SA municipality will be known as ‘Winnie Madikizela Mandela’ from Tuesday