Countdown to Covid Vaccine in SA

Pfizer, and German partner, BioNtech are confident that the COVID-19 vaccine they’ve developed could be rolled out within weeks. When it will reach South Africa however is still a question, with experts saying that realistically, we could only get a vaccine in the middle or latter part of 2021.

Moderna another pharmaceutical giant, whose vaccine development was funded by the US government, also reported impressive results, with them showing a 95% efficacy across all age groups.

Countries like the United States which contributed hundreds of millions of dollars into the development of candidate vaccines,  will ensure its citizens are first to benefit from the roll-out, while the rest of us will have to wait a little, or a lot longer to be protected from the coronavirus.

Experts agreed on which groups should be prioritised when the country secures its first batch of COVID-19 vaccines – health workers, patients with co-morbidities, the elderly and other people considered high risk would be first on the list.

But South Africa has alternative options – one of which is the Covax facility.

This World Health Organization iniative with the vaccine alliance GAVI (run by the Bill and Melinda Gates Foundation), as well as the Coalition for Epidemic Preparedness Innovations aims to negotiate prices and ensure equitable vaccine distribution for the 184 countries who have signed up for the facility.

Co-director of South Africa’s COVID-19 Ministerial Advisory Council, Professor Salim Abdool Karim, said that while it would only be much later when the country gets its hands on a vaccine, there are other important things to factor in before any roll-out can happen. “The news of the vaccine has come fast. All of us are now scrambling to get all our pieces. We thought we [had] the entire next year. We are now fast-tracking those plans.”

These plans include making sure that a vaccine best suited for South Africa is chosen, that there’s reasonable infrastructure preparedness for distribution and prioritisation of who gets it first.

But Karim added that it was anyone’s guess when the vaccine would become available.

“Remember these companies have not yet made the vaccines. It’s not like vaccines are sitting somewhere [and] they just have to be shipped. They still have to be made. We have no idea how long it’s going to take. I think we will be lucky if we get vaccines in the third quarter of next year.”

Wits University professor of vaccinology, Shabir Madhi, said that government should have started working on these plans a long time ago. “That we don’t spend another three to six months figuring out how to get the vaccines to people. There will be a level of unfairness with about 30% of the population which have comorbidities and the elderly. We will be fortunate if we get as many as 20% vaccines.”

“We are going to need to be strategic about who gets it. People with diabetes, hypertension, severe obesity. Now that group as a whole is not insignificant. That probably makes up 40% of the adult population in South Africa and I’m not even talking about HIV and tuberculosis,” Madhi said.

Madhi said that if South Africa could secure vaccinations for between 20% to 25% of the adult population, it would be a strong beginning. Should other candidate vaccines currently in human trials return with encouraging results, access to vaccines will be much improved.  South Africa is currently involved in four other human trials.

Europe is experiencing a second wave of Covid-19 forcing many European countries to go into lockdown again. Scientists in South Africa called on South Africans to learn from the mistakes made by other countries and continue to observe regulations pertaining to social distancing and hygiene. “South Africans cannot become complacent and lazy. If that happens, we will face another wave of the Coronavirus which could see the country going into lockdown again. Especially with the festive season approacing, South Africans have to adhere to established protocol,” said one scientist.

It is close to a year since the coronavirus outbreak started in Wuhan, China. Since the outbreak scientists across the globe have pleaded with people to steer clear of social gatherings, to work from home, and to wear a mask when they do venture outside. South Africans see the festive season as an opportunity for year-end functions, family braai’s, and packed beaches. 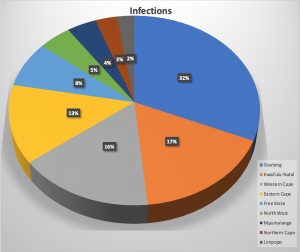 The chairperson of the Ministerial Advisory Committee on Covid-19, Professor Abdool Karim, however said that now was not the time to forget that we were in the grip of a global pandemic. “People are tired, they’re frustrated, they’re irritated and they just want it to end. We control our risks and we control our country’s risk. If we are just a bit more careful… we just need to hang in there.”

Professor Shabir Madhi of Wits Vaccinology said that South Africa was already experiencing a resurgence in cases. “When you go around South Africa right now, people have become more complacent in terms of the use of the face maks, in terms of the physical distancing, in terms of avoiding overcrowded places. Complacency has crept in.” It is this complacency and super spreader events that have been the key drivers in the second wave gripping Europe and the United States.