COVID-19: Restaurants, cinemas and casinos are now unbanned, but must wait for more rules.

Written by Renate on 3 months ago. Posted in Covid-19, National News.

According to Business Insider, a number of leisure activities were technically unbanned under Alert Level 3 of SA’s lockdown late on Thursday night, but in a way that still makes it illegal for establishments to actually open their doors.

Co-operative governance and traditional affairs minister Nkosazana Dlamini-Zuma gazetted a set of amendments to the primary rules that govern lockdown which came into immediate effect as of Thursday, even though they were published after 23:00.

Those amendments create new exceptions to the otherwise blanket ban on gatherings for conferences, casinos, cinemas, restaurants, and museums and libraries.

But in each case gatherings are allowed only under adherence to sector-specific safety protocols, which have not yet been published for any of those sectors, making it impossible to comply.

Only salons and tattoo parlours have had such rules released since President Cyril Ramaphosa announced the plan to further relax lockdown restrictions.

According to Business Insider, the late-night amendments say that conferences “restricted to business purposes” may take place, and cinemas and theatres may open, as long as all host no more than 50 people at a time.

Casinos do not have such an absolute limit on visitors.

Instead their patrons must stay 1.5 metres away from one another, while the regulations also impose “a restriction on the number of persons allowed in the casino to not more than 50 percent of the available floor space”.

Just why casinos must close off half their floor space to customers, rather than spreading them across the entire available area, is not explained.

That percentage limit, the new regulations say, may be increased.

Restaurants – and museums, galleries, libraries, and archives – get neither a hard limit not any mention of floorspace percentages; gatherings there are to be controlled entirely by another set of regulations that must be issued for that purpose.

All the sectors are enjoined to “strict adherence to all health protocols and social distancing measures as provided for in directions that must be issued” by their respective cabinet ministers, after consultation with health minister Zwelini Mkhize.

The Cogta regulations do contain a handful of specific rules, including:

Shortly after publication of the amendments, the Restaurant Association of SA told members it considered the new rules “vague” and as passing the buck. It promised that its attorneys would be “requesting the immediate release of these directions” that would allow sit-down restaurants to open their doors.

Link to the amendments 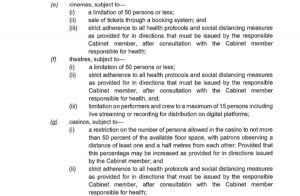 Guidelines to follow for domestic workers returning to work

Written by Lize Geldenhuis on 4 months ago. Posted in News.

The new regulations under level 3 are not specific regarding domestic workers and gardeners.

According to BusinessTech, Rosalind Davey, a partner in Bowmans Employment & Benefit Practise said the level 3 guidelines for businesses should be followed with a focus

on creating a safe working environment for employees. A number of businesses require a declaration from their employees which extends to domestic workers.

Guidelines for the employers regarding domestic workers

According to Davey the regulations are not specific on this issue,

The regulations are not clear on travel permits for domestic workers. According to Davey the employers can use the prescribed permit to indicate the following,

Written by Lize Geldenhuis on 4 months ago. Posted in News.

According to News24 a court has declared the Level 3 and Level 4 lockdown regulations to be unconstitutional and invalid.

The High Court in Pretoria ruled today that the Minister of Cooperative Governance and Traditional Affairs Nkosazana Dlamini-Zuma has 14 days to formulate changes to the regulations.

In the meantime, the current lockdown regulations will still apply.

The judgment said the regulations “in a substantial number of instances are not rationally connected to the objectives of slowing the rate of infection or limiting the spread” of Covid-19.

The judgment said the government has not produced any bona fide evidence that its means of enforcing the lockdown are “justifiable”, and they can therefore be deemed arbitrary and unlawful.

The lockdown regulations go against rights enshrined in the Bill of Rights, the judgment says.

The application was brought by the Liberty Fighters Network, the Hola Bona Renaissance Foundation and attorney Reyno de Beer.