Written by Lize Geldenhuis on July 19, 2021. Posted in National News. Leave a Comment

The City of Cape Town’s JP Smith confirmed that arrests had been made after Monday morning’s incident and that two firearms were confiscated.

“Which follows the three arrests made last week of a white vehicle that was shadowing the taxis, with three men with firearms and a very large amount of ammunition. So, hopefully we’re starting to get to the point where some of these shooters that are being arrested will lead to effective further arrests and convictions,” Smith said.

It was understood that another bus was targeted on the N2 highway. The driver was shot in the face at around 06:30 on Monday morning between Borchard’s quarry and the Aiport Approach Road.

JP Smith said that authorities received intelligence over the weekend regarding the possibility of further attacks to continually destabilise public transport. 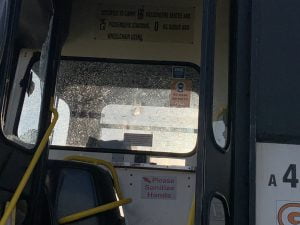 “We’ve had staff on scene at numerous taxi ranks from very early this morning before five. Some of the ranks are operating normally and passengers are moving, but at others, there seems to be a degree of intimidation or decision was taken some way not to load passengers, so we’ve seen empty taxis,” he added.