Petrus Sitho, along with 3 Khoi San men has embarked on a mission to create more awareness of the reality of farm murders in South Africa.  On Tuesday last week, 13 April, the four men set out on foot from East London and they heading for Pretoria.  Today the group arrived in Alberton where they continued to protest against the scourge of farm murders that have been plaguing the country for years. 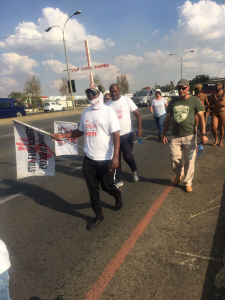 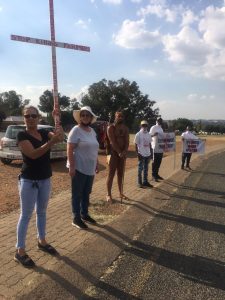 “The president should be talking about farm murders as often as he talks to update the nation on the coronavirus pandemic,” said Sithole to tameTIMES.  Every day the group starts walking at 04:00 in the morning and manages to complete around 50 kilometers per day.  Sitho says they have frequently gone without food en had to deal with aching feet but they have always had somewhere to sleep.

“It’s not been easy, but I can’t complain.  I have to do something.  I have to make a difference.”

Sitho has been an activist against farm murders since 2018.  He was fired in 2020 for going to Senekal to support the farmers after the murder of Brendin Horner.  Sitho was also assaulted by unnamed assailants while camping outside the Union buildings for three days in 2018.

It is clear that nothing will get Sitho down.  He refuses to back down and continues to speak out against farm attacks.  “These [criminals] know that the food they eat is produced by farmers.”  Sitho believes that South Africa will soon face a serious shortage of food as was the case in Zimbabwe.

“People must see that our farmers are being murdered and the president must increase security on farmland to protect farmers.  [Whether the farmers are] White, Black, Brown, Indian, or Khoisan, they are farmers.  They provide the food on our plates,” said Sitho 3 days ago while interviewed by reporters on his way to Alberton.

They will arrive in Potchefstroom on Sunday where they will spend the day resting.