South Africa has just been ranked as the world’s most miserable economy after Venezuela and Argentina.

According to Business Insider, Bloomberg’s Misery Index, which ranks major economies by inflation and unemployment expectations, shows South Africa is at the third-worst position among major economies.

While the local inflation rate of around 2.2% is the lowest in 15 years, the official unemployment rate of 30% is the highest in a decade. Government estimates that between 3 and 7 million people could lose their jobs this year.

Thailand, Singapore, and Japan registered as the least miserable nations, with Switzerland in fourth place. 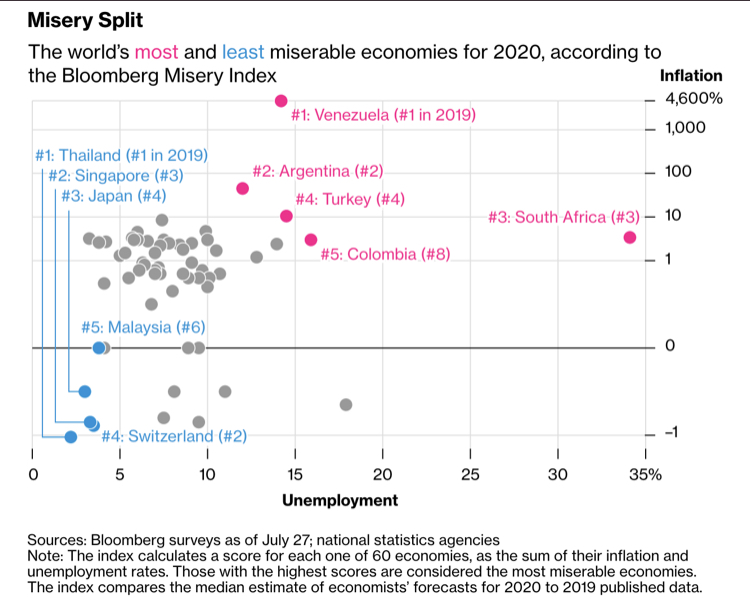 The US jumped up sharply in the misery index – from number 50 to 25.

Economists expect near-term inflation to slide below 1% in the US as a drop in consumer spending drives steady disinflation. The nation’s unemployment rate spiked as high as 13.4% in the second quarter from a pre-pandemic reading of 3.5%, ranking among the worst labor market tumbles around the world.

Israel, Iceland, and Panama were the only countries to suffer a drop close to that seen in the US, according to Bloomberg. Of the world’s largest economies, China and Japan declined the least, while the eurozone and the UK both experienced bigger jumps in joblessness and drops in inflation.

Not all index improvements equate to economic happiness, according to Bloomberg. Some higher rankings were fuelled by demand hits that pushed inflation expectations into negative territory. The top four least miserable economies of 2020 all expect deflation to hit in the near future. Such a trend would likely harm borrowers and worsen already steep recessions.

Mung Dal with Turmeric and Shallots