News: Bread in SA may now stay fresher for longer .

After many years of lobbying, government has finally approved sorbic acid as an ingredient in local bread, Business Insider reported.

One of the most commonly used food preservatives in the world, it should keep local bread fresher for longer.

While the department of health approved the use of sorbic acid in all types of bread in February, it was finally gazetted last month: 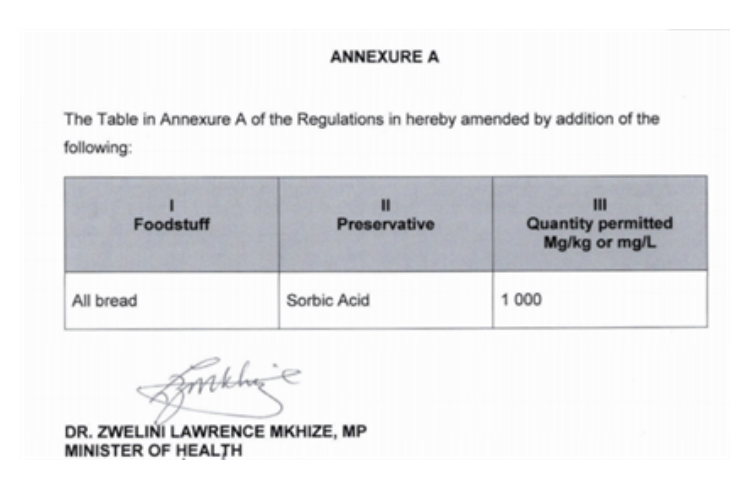 New regulations to allow sorbic acid for use in all bread was gazetted last month by the department of health.

The use of sorbic acid should extend bread’s shelf life in South Africa by two to three days, says Geoff Penny, executive director of the South African Chamber of Baking, which represents the large bread producers.

Currently, a typical loaf of bread in South Africa usually lasts about five days. Sorbic acid should stretch it to more than a week.

Penny says the ingredient will have no impact on the taste, and does not have any side-effects.

It is, however, more expensive than the standard SA bread preservative, calcium propionate, and will probably add a couple of cents to the price of a loaf, says Penny. The bread producers may decide to absorb that cost.

A natural occurring compound, sorbic acid was isolated in 1859 in Germany, after a scientist distilled rowanberries. It was found to be highly effective at inhibiting the growth of mould and was then used to preserve white wines and meat.

A decade ago, the European Union and the UN’s food standards authority also approved it for use in bread.

It is not clear why South Africa’s department of health did not approve sorbic acid earlier, given that it’s already a standard ingredient elsewhere in the world, says Penny.

It is also already allowed in other goods, including other baked products, in South Africa.

But the announcement does come at a good time: as bread will last longer, it should help to cut down shop visits during the coronavirus pandemic, he said.

Jacob Zuma finally has his day in court

2 People killed and one critical in Xavier M1 shooting