SANParks recently shared some new discoveries with the one causing quite a bit of excitement. The Red Widow as it is currently being called may be a new discovery at the Table Mountain National Park.

The spider was spotted at the national park and while scientists are feeling extra excited, they are following the standard protocol in checking the formal taxonomic classification process. This process is done to see if a species has ever been described as such before.

The announcement was made on the 10th of July via their Facebook page, and along with the Red Widow information they also shared the discovery of a new sedge. There are less than 10 of the species known around the world, and this new one is called the Hidden Veldbush. 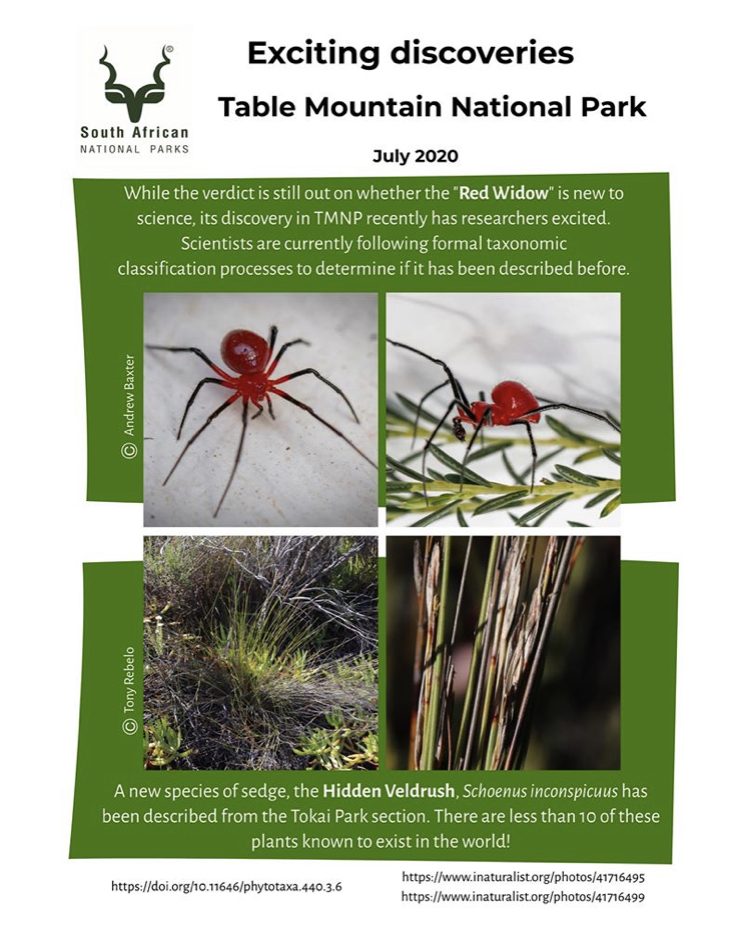 The Spider Club of Southern Africa shared some information about the Red Widow too but they are calling it the Strawberry Theridiid. The red spider was selected as their spider of the month by popular vote and photographer Andrew Baxter gave some insight to the picture.

“The first specimen was photographed and released – we assumed it was a common spider. After the initial feedback from the forum, Jen and I went back to the same location in the hope of collecting a live specimen. After many hours of bushwhacking, log-lifting, rock-turning and stick-poking we eventually collected two individuals – a male and female. All subsequent searches have come up blank. All 3 spiders were located on the ‘back table’ region of Table Mountain between 500-800 m altitude on west-facing slopes among moist fynbos in the middle of the day – sunny but cold. They were all active. No evidence of webs – just scurrying around. They are small spiders – body size approximately 1 cm – so seeing them among the dense fynbos is tricky. But Jen is an arachnophobe and has an incredible ability to see webs and spiders from near-miraculous distances!

I have received incredible support and feedback from the spider community, and the past week has been nothing short of a whirlwind of communication from experts around the world. I am blessed to have received tremendous support from Norman Larsen, Dr Ian Engelbrecht, Dr Morne du Plessis, Prof. Gustavo Hormiga and many others.

The objective is to seek a description from a Theridiidae (seems likely) expert with a view to determining the taxonomy. Should this spider be an undescribed species then ultimately we would hope for a classification – but as you well know this can be a complex process.

Anyway, I would like the community to know that if it does turn out to be a new species, that our wish is to ‘donate’ the naming/nomenclature to a species-naming auction to be facilitated by WWF South Africa, with all the proceeds to accrue to WWF for natural habitat protection. (As an aside, I used to head up fundraising for WWF and a few years ago I auctioned off the naming rights for a new fynbos flower at the Linnaeus Institute in London which enabled WWF to purchase a significant piece of private property – now incorporated into the conservation real-estate of Table Mountain National Park.) Hopefully, these little red chaps can bring the same conservation outcome.”

Greece set to reopen to ALL visitors in May