Message that cigarettes are going back on sale is fake news 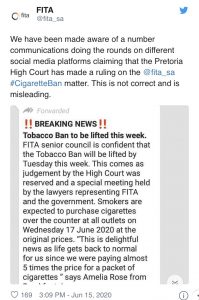 According to the Citizen, Fita says a Whatsapp message claiming that the courts have now said its OK to sell cigarettes is simply wrong.

The Fair Trade Independent Tobacco Association (Fita) have debunked a Whatsapp message claiming that cigarettes will go back on the shelves on Wednesday.

Fita say the message, which has been widely circulated, is incorrect and is misleading.

The judgement is set to be emailed to the parties, with Fita warning that misleading messages circulating on social media have incorrectly stated that the judgement has been handed down.

“We have been made aware of a number of communications doing the rounds on different social media platforms claiming that the Pretoria High Court has made a ruling on the cigarette ban matter. This is not correct and is misleading,” Fita said.

“We will make the necessary announcement once we are in receipt of the judgment from the Pretoria High Court. We thank you as always for your continued support throughout this entire period.”

The Association is currently locked in a court battle with government over the ban on cigarettes.

The fake message claims the courts have now given the OK for the ban to be lifted, despite the ongoing court case which has seen the government argue in favour of the ban, claiming that smokers are more likely to get a serious case of Covid-19.

No hard lockdown for South Africa

Government News: From the Desk of the President