Millions of rands were spent in recent years to repair the iconic double-decker section of the M1 highway.  Since the rainy season arrived it appears that it was largely a waste of money.  The Gauteng Government Roads and Transport Committee said that a probe into the project has not been ruled out. 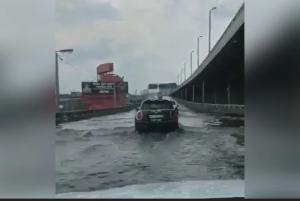 During a recent thunderstorm, the lower deck of the highway flooded, leading to a social media outcry as motorists posted videos of cars crawling through a veritable sea of water.  The committee has voiced its concerns about complaints received, adding that questions had been raised pertaining to the R169-million refurbishment of the highway.  “This appears to have been a partial waste of public resources as the recent flooding has proven that the drainage system that was meant to be addressed with the recent rehabilitation still does not work,” the committee commented.

The highway was closed to traffic since 2018 and the refurbishment included an upgrade of the existing storm water drainage system.  The particular section of the bridge, where the lower deck rises to join the upper deck has long been prone to flooding.   This section of the M1 highway is an essential, vital artery for motorists. 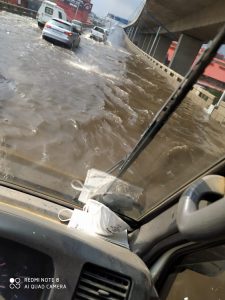 “We will get the Joburg Road Agency [JRA] to account for the unsatisfactory results that were meant to be addressed in the project scope,” said Dumisani Dakile, committee chairperson. The committee called a meeting with the city at which it hopes to review the project expenditure. It did not rule out the possibility of calling for a probe into the matter.

The drainage system relies on downpipes that drains the water off the bridge and into the Newtown precinct. Older metal pipes were replaced with PVC pipes and extra drainage points were built  during the refurbishment. The JRA apologised to commuters. Investigations into the flooding are under way while maintenance of the storm water infrastructure has been ramped up.  Media reports claimed that the pipes were clogged with litter and had not been unblocked by maintenance teams. Meanwhile the agency has placed the head of its regional operation department on temporary suspension while the matter is investigated.