The South African Police Service can give a person arrested on suspicion of a less serious crime, an option to pay an admission of guilt fine.

The fine is an admission of guilt for a less serious offence without having to appear in court, preventing an overload of the court system.

However, an admission of guilt also comes with a criminal record.

Cele said in a recent written parliamentary Q&A, that from when the National State of Disaster was first declared, to 19 June, 22,815 people had paid an admission of guilt fine.

A further 199,677 are scheduled to appear in court, or pay an admission of guilt fine.

He further broke down the statistics across the country’s provinces as follows: 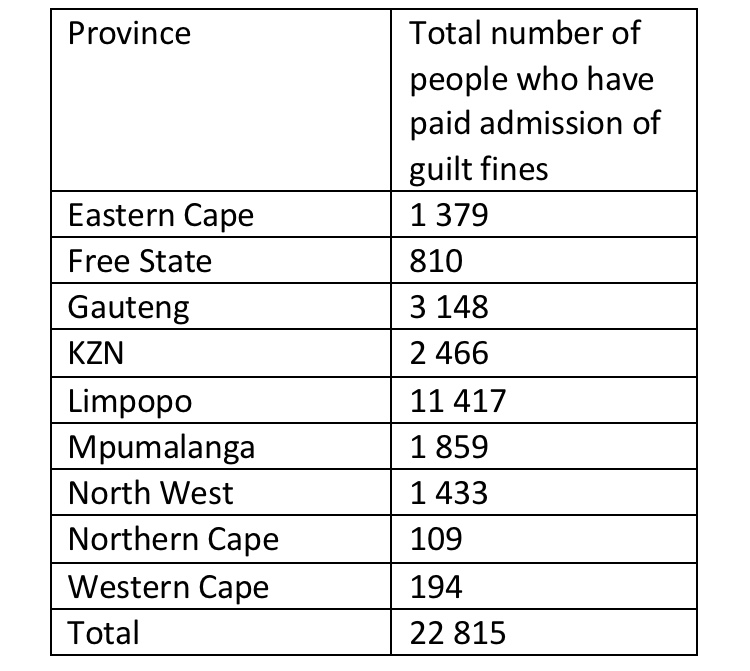 Cele said that the following offences were most prevalent across all provinces:

Failure by a person to be confined to residence during lockdown except to perform/obtain essential services/goods, collect a social grant etc;

Failure by a person to be confined to his/her residence, read with Regulation 31 (2) (gatherings of people);

Convening 0f a gathering, assembly, concourse/procession on a public road or building, place or premises except at a workplace or normal residence;

Selling of tobacco products, e-cigarettes or related other than for export.

The Department of Justice and Correctional Services said in May that it is working on new legislation which will stop an admission of guilt fine from including a criminal record.

Deputy minister John Jefferies said: “This is something we have been wanting to address and it is something that will be (included) in an upcoming Judicial Matters Bill,” he said.

“The idea will be that most admission of guilt fines will not attract a criminal record.

“Sometimes the due process is not properly followed and sometimes people feel pressured to pay the fine and don’t realise they are going to get a record and will affect their rights.

“So this is something that we are going to be addressing.”

Covid-19: A new coronavirus strain is spreading from Europe to the US

Covid-19: A guide to preventing and addressing social stigma.