Stun grenades and water canon used to disperse protesters outside Parliament. Protesters from the hospitality and tourism industry are protesting. @GroundUp_News #serveusplease pic.twitter.com/DQkFtnUDra

Employees from various hospitality and restaurant businesses held various protests across South Africa on Friday. The protests were to raise their objections to some of the Covid-19 restrictions.

The action comes two days after another countrywide protest by restaurants where thousands took to the streets to call on the government to lift the curfew and do away with the ban on smoking and alcohol.

In Cape Town, stun grenades and water cannons were used to disperse protesters marching in Roeland and Plein Streets outside Parliament. They were carrying posters reading “#JobsSaveLives” and “#ServeUsPlease”.

At least four people were arrested. SAPS spokesperson Sergeant Noloyiso Rwexana said, “Please be advised that Public Order Police took action to dispersed a group of about 200 people who were protesting earlier. Four men aged between 24 and 59 were arrested and were given fines for contravening of Disaster Management Act regulations.”

On Friday, Ashleigh Perremore, an organiser of the “Serve Us Please” movement said, “The aim is to show solidarity within the hospitality, tourism, food and liquor industry … we are not going to just sit down and let them kill our industries.” 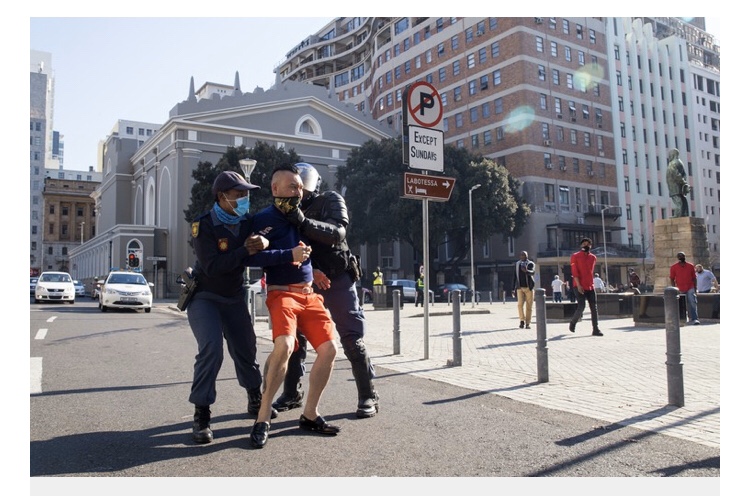 Police arresting one of the protesters on Friday. Photo: Ashraf Hendricks

Perremore joined hundreds of protesters who lined up outside Parliament in Cape Town city centre while maintaining social distancing.

Police arrived in numbers and informed the group that the gathering was illegal under the disaster management act. When protesters refused to disperse, police used water canons and stun grenades. Police then started patrolling the city centre telling everyone to “clear the area”, but protesters remained in scattered groups.

“We were completely peaceful and posed no threat,” said Kyle Bownes. “We just want our voices heard. We’re a massive group of civilians who have not worked for four months. We’ve had no income,” he said.

Bownes was a manager at The Stack, a restaurant in the Gardens. He said that he temporarily closed before lockdown started in March. Two weeks ago, they permanently closed and 30 people lost their jobs. Bownes said that there has been no sign of the UIF mentioned by President Ramaphosa. “When are we going to work again?” he asked.

Western Cape ministers of Community Safety, Albert Fritz and Finance and Economic Opportunities, David Maynier condemned what they described as the heavy-handed and unwarranted response to the reportedly peaceful protesters.

“It is absurd that SAPS and the SANDF are not able to fully mobilise enough resources to respond adequately to violent protests in areas which are experiencing looting, public violence, land invasions, destruction of property and barricading of roads; and yet they are able to mobilise water cannons and stun grenades at the drop of a hat to disperse peaceful protests,” Fritz said. 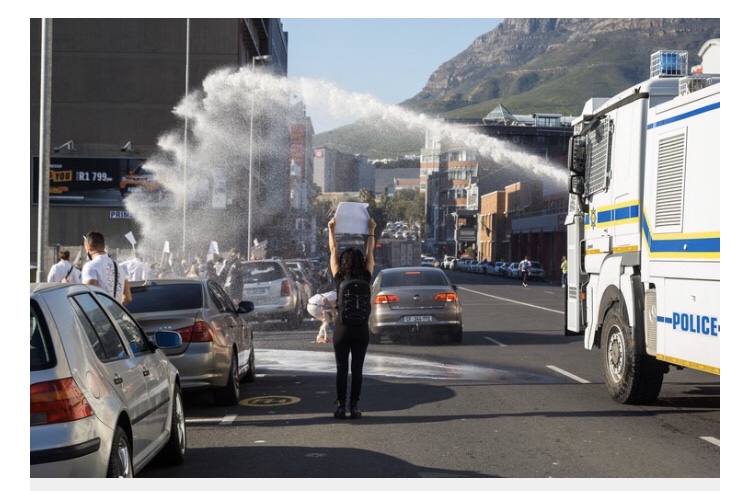 Hundreds of people lined the street near Parliament to raise their objections to some of the Covid-19 restrictions. Photo: Ashraf Hendricks

Maynier said, “Our tourism and hospitality industry is hard hit by the Covid-19 pandemic. We have repeatedly called for the opening of these businesses where they are able to do so safely and responsibly.

“Instead of a constructive and common-sense response, the tourism and hospitality sector has been subject to flip flopping and unnecessary use of violence in response to a peaceful protest … These businesses can open safely and they should be allowed to do so.”

In Johannesburg, about 80 people formed a human chain using ribbons on the corner of Maude and Rivonia Street in Sandton. Some protesters held placards which read: “One million jobs, not one million graves” and “#Iamtourism”. 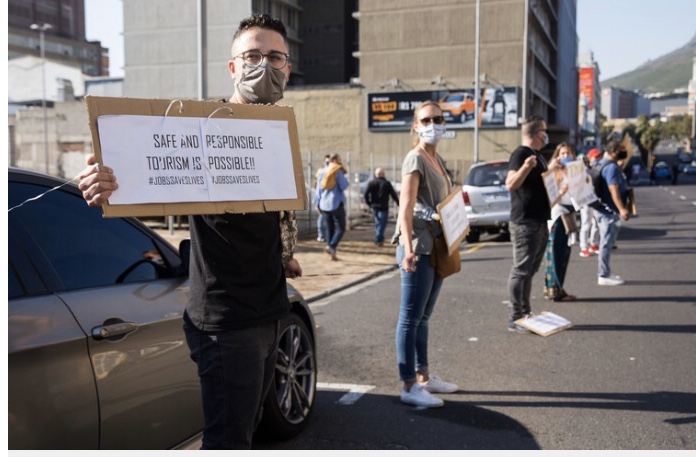 About 80 people from the tourism and hospitality industry formed a human chain using ribbons on the corner of Maude and Rivonia Street in Sandton. Photo: Zoë Postman

Picketer, Yves Kadilo, has worked as a bartender for three years. “For the government to tell us that we must only operate using delivery while kids are going to school and taxis are operating at 100% capacity, doesn’t make sense,” he said.

Kadilo said the tourism and hospitality industry employed millions of people indirectly like plumbers and other service providers. “Everything was put on hold during the lockdown which left people without jobs,” he said.

“I have a family that solely depends on me but now with Covid-19, they say no sale of alcohol. What does that mean for me and my family?” he asked.

Kadilo said bartending was about more than just the money, he said. “People come to me for entertainment … It’s like theatre for us to display our craft but now there is no stage.”

The police arrived at about 11am and asked protesters to disperse.

Lockdown: Foreign tourists may be allowed to SA in January 2021.

EDUCATION: Schools will reopen despite the rise in Covid-19 cases.

Another farm murder in Free State

Delaying 2021 elections to 2024 is unconstitutional

NCCC wants reopening of schools to be postponed

Stage 2 load shedding to be implemented from Thursday to Sunday

Confirmed cases in SA increase by 18 555

SARS will do lifestyle audits in bid to recover billions

Should the Covid-19 vaccine be mandatory?

How Covid-19 changed the property industry