The Star visited the Vosloorus cemetery, which resembled a demolition site as more than half of the graves with tombstones had been vandalised. 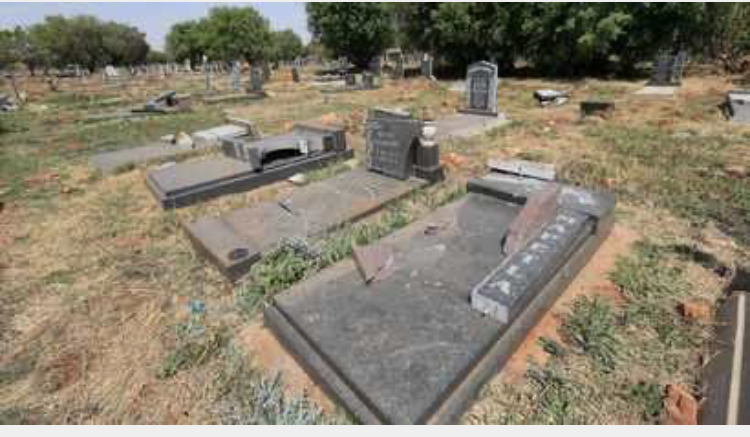 Decimated tombstones at a major Ekurhuleni cemetery have drawn the ire of families, whose loved ones’ graves were destroyed due to an alleged lack of security by the city. Picture: Simphiwe Mbokazi/African News Agency (ANA)

It was unclear what the motive for the destruction was, but the security wall meant to protect the graves was in a porous condition, and the city said it was the entry point for the vandals.

After The Star had sent questions to the city regarding the vandalism, Makhosazana Mabaso, Ekurhuleni’s member of the mayoral committee for environment resources and waste management services, released a public statement expressing sympathy to families for the destruction.

“I am deeply shocked and saddened by this heinous criminal act.

“A cemetery is a peaceful final resting place for our loved ones, and should be treated with respect and dignity.

“We will not allow criminal activities to prevail in our facilities, and we are working with law enforcers to get to the bottom of this situation,” Mabaso said.

However, when The Star followed up with Ekurhuleni on whether it would help families replace dozens of destroyed tombstones, after having acknowledged that it was responsible for “the upkeep of the cemeteries and provision of protection that is sufficient for such sacred facilities”, the city said it would not.

“While the incident is most unfortunate, the city will not assume financial responsibility,” said Ekurhuleni spokesperson Themba Gadebe.

Betty Seboka, 64, whose husband’s tombstone was destroyed, said that the city’s stance had exacerbated the grief she felt on Friday when she saw the shocking state of her life partner’s resting place.

Seboka, whose husband was buried in 1994, said it was heartbreaking that her children worked hard to ensure their father had a dignified resting place, and paid almost R24 000 for the tombstones to be erected in 2018.

“Then there are African customs that we do to unveil the tombstones that also cost a lot of money. The city needs to pay for this damage because we thought our loved ones were secured in the cemetery, but they were not,” an emotional Seboka said.

Her daughter, Motshidisi, confirmed that Ekurhuleni had opened a criminal case and that her family had given a statement to police.

Mental Health Crisis in the Workforce.