Local News: Betway SA made a R30,000 donation to the Highlanders Netball Club

Betway South Africa’s ongoing efforts towards community sports development was extended to the sport of Netball. The sports betting and entertainment company made a R30,000 donation to the Highlanders Netball Club in Katlehong, east of Johannesburg on Saturday, as part of this year’s FA Community Shield initiative. 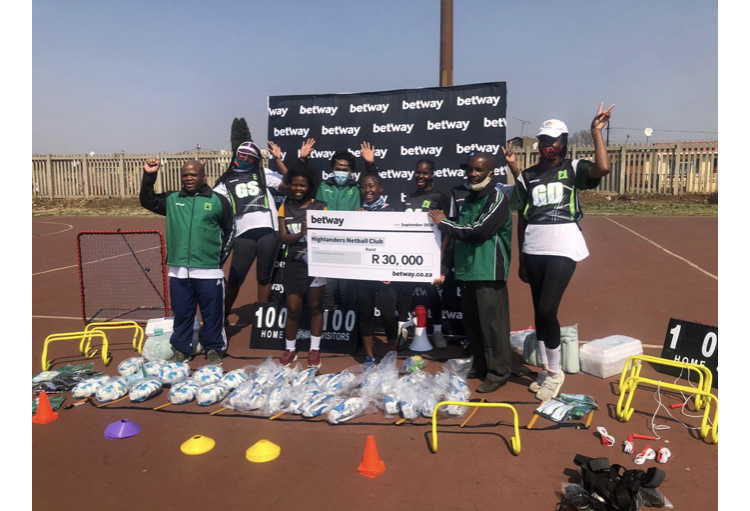 The donation came as a result of Betway SA pledging to donate R1 for each bet placed for the FA Community Shield which took place on Saturday, 29 August. The FA Community Shield is an annual football match contested between the champions of the English Premier League and the holders of the FA Cup. All proceeds from the game are distributed to charities, which are selected by each of the clubs who competed in the FA Cup.

In line with its ongoing monthly #BetwayCares initiatives and the Community Shield’s mandate, the Highlanders Netball Club were identified as a worthy partner to make a difference to. The donation included much needed equipment as part of the brand’s promise of lending a helping hand towards the development of community sports.

Speaking at the official handover of the donation which included brand new playing kit, tracksuits, bibs and training equipment, Betway South Africa’s Marketing Manager, David Rachidi said Betway recently honoured South African women in sport through the brand’s women’s month celebrations and saw it fit that Betway further partnered with an organisation that had women empowerment at the heart of everything they did.

“Coming back from our recent celebrations of women’s month, we were excited to focus our #BetwayCares initiative towards a cause that empowers women in our communities. As part of our women’s month celebrations, the brand promised to continue playing its part in empowering and uplifting women’s sport. With the country set to host the Netball World Cup, this for us would mark the start of a number of community initiatives that the brand will be embarking on in helping to develop the sport of Netball in underprivileged communities”, said Rachidi.

In welcoming the much needed donation, Highlanders Netball Club founder and community member, Benjamin Mphahlele said the club and community of Ncala township were highly grateful for the brand’s generosity.

“As Highlanders Netball Club, the community of Ncala and surrounding Katlehong areas, we would like to extend our gratitude to Betway for this wonderful gesture. The donation comes at a crucial time where the club is still trying to recover from the socio-economic crisis exasperated by Covid-19 which has resulted in a serious setback for a number of community netball clubs. Thanks to Betway, the club will experience improved training methods from the new equipment and most importantly, we look and play as a unified team when travelling to matches”, said an elated Mphahlele.