A group of residents in Langaville near Tsakane has stopped a R56.8 million water leaks project meant to benefit 15,000 houses in Tsakane, Langaville and Gelukdal, part of the City of Ekurhuleni’s “war on leaks”.

The group says it will not allow the project to continue unless community members are given jobs. They also question the criteria used in the tender award won by Makhado Management. 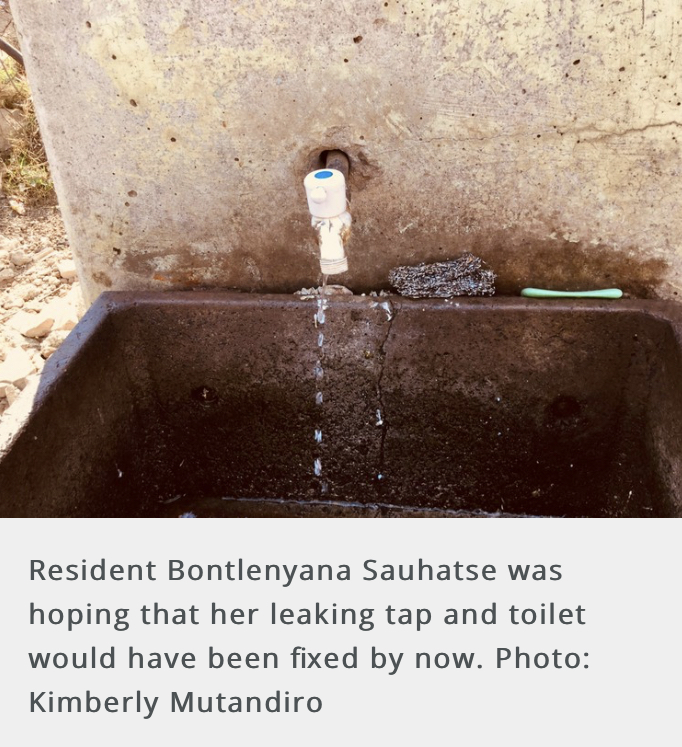 For the past four weeks, the contractor has been blocked by the community from entering Extension 4. Metro police have been patrolling, but residents say they will fight the police if they try to defend any “outsiders”.

The City says the project is to reduce water wastage by fixing leaks on private properties and ensuring that all properties have functional water meters.

According to the City, the project also “seeks to upskill local [business] and labourers, who are appointed and trained by the main contractor to conduct the actual domestic plumbing work”.

“The number of the local subcontractors that were to be appointed for Phase 3 was 15. Once the project is complete, it is envisaged that the community of Tsakane will have access to local plumbers that have the skills to conduct quality work in their homes,” the City said in a statement.

The City’s media liaison office said that the the contracts were advertised at the Tsakane Customer Care Centre and “shared through Council’s ward structures”.

But community committee representative Bheki Ngobeni said, “Our councillor did not even inform the branch executive committee in our area that the project plans had been finalised. We were surprised to see many people from other wards knocking on our doors during this Covid era, saying they want to check our premises for leakages … We were waiting to submit our CVs and project proposals. No one told us where and how to go about it.”

Resident Freddy Malongwe said he has a certificate to work in plumbing but was not given a chance to submit a proposal.

Resident Abongile Gxara warned that “if any unknown faces enter this community to repair our toilets, taps and sewers, hell will break loose. It makes no sense for strangers to be employed in the project while us community members are jobless.”

“Our community has never been given a chance to get jobs in any of the projects. Millions are being syphoned [off] while cheap labourers from other wards are being employed and cheap material is used to fix our homes. The same contractor is used every time, which makes us think that someone in the council is benefitting somehow,” said Gxara.

Meanwhile, many residents are disappointed by the halt to the project.

“We were hoping that everything would be fixed by now. Now that the project is on hold it means we must suffer a while longer,” said Bontlenyana Sauhatse. She has a leaking tap and toilet, and her yard stinks from the seepage.

Ward 81 Councillor Makhosazana Glorious Gwayana (ANC) said, “The community is suffering because of these silly fights … I have been receiving calls from people … They want their toilets fixed.”

She said metro police called in to monitor the situation were chased out of the area.

Gwayana said the people stopping the project are fellow ANC members with a political objective. “This is an example of party hooliganism whereby members of a political party want to benefit from all projects alone without giving other members of the community a chance. If they are employed in the project the job continues, if they are not employed, they fight.

“The people who are fighting me are not ordinary members of the community but are the ANC branch leadership. They have a political agenda. We are going to provincial elections next year and they are trying to score points for themselves. They expect me to serve them as the ANC because l am from ANC. That is not possible, as a councillor l serve the whole community, not just ANC. The problem is that they are politicising the matter and unfortunately l cannot give them what they want, and l cannot call a big meeting because of Covid-19 regulations,” said Gwayana.

She said the project must benefit all the voting districts, with 15 people hired for each.

Gwayana said the matter had been escalated to the Mayco Member for water and sanitation.

The City of Ekurhuleni said it is aware of the stoppage and seeking legal advice.

Not wearing a mask is a criminal offence

Expert on AKA ‘tell all’: Body language tells a different story