Lauren Dickason charged with murdering her three children in their Timaru home on Thursday night has been remanded for a psychiatric assessment. The 40-year-old South African mom, a medical practitioner, appeared before Judge Dominic Dravitzki in the Timaru District Court at 10:00 on Saturday.

Dickason arrived in court dressed in a hooded sweatshirt and black trousers. She was escorted by two police officers.  Dickason appeared calm and kept her arms folded close to her chest. She stared at the floor for most of her appearance.

Judge Dravitzki remanded Dickason to the Hillmorton Hospital, Christchurch, for a psychiatric assessment to reappear in the High Court in Timaru on October 5. Duty solicitor Kelly Beazley applied for interim name suppression for Dickason, however, this was withdrawn after New Zealand News Site Stuff opposed the application. 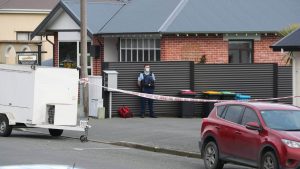 A South Canterbury District Health Board psychiatrist told the court remanding Dickason to prison was felt to be inappropriate given the circumstances.  Dickason, her husband Graham, and their three girls – twin daughters Maya and Karla, 2, and their older sister Liane, 6, arrived in New Zealand in August and had been in Timaru for only a week.

Graham, an orthopaedic surgeon, who was employed by Timaru Hospital, came home about 22:00 on Thursday to find his three children dead. Emergency services arrived at the house shortly after 22:00, but the girls could not be saved.

Detectives started a homicide inquiry and Lauren Dickason was taken to Timaru Hospital for assessment. She was charged with murder on Friday night. The children’s bodies were removed from the house late on Friday afternoon. Flowers were left in tribute nearby, along with a soft toy.

More than 800 suspects arrested in Gauteng over the long weekend