The Gauteng Health Department have confirmed that the Nasrec Field Hospital will remain open until January 2021.  This despite that only 5 patients being admitted in October.  The purpose of the hospital was to alleviate the burden of Coronavirus patients at clinics and hospitals across Johannesburg.  The facility cost R350 million to set up.

Jacob Mamabolo, Gauteng acting MEC for health,, said that the threat of Covid-19 infections has not been sufficiently reduce to justify closure of the field hospital.  He said the risk of a second wave of covid infections were too high. “Nasrec will only close after January 2021, which is a key milestone post the festive season. The department will be monitoring the festive season period closely as it relates to Covid-19 infections,” Mamabolo explained.

For October only five patients were admitted while September had 21 patients being treated at the facility.  The facility boasts 500 beds with quarantine and isolation facilities and a 1,000 bed step-down hospital facility.  DA Health MEC Jack Bloom that the cost to keep the field hospital open until the end of January could be as much as R256-million. “This is really exorbitant as only 604 people were quarantined or isolated, and only 96 patients were treated there for this period. It amounts to R96,000 paid for each quarantined/isolated person, and R720,000 for each patient treated at the field hospital,” he said. 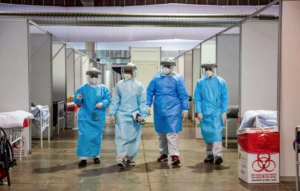 According to Bloom, the department is paying for the 1,000-bed facility to ensure that there is capacity for a possible second wave of infections, or the possibility of an infection spike over the holiday period in December.  The original projected cost was R350-million but is now between R157-million and R256-million for all costs.  This includes assets to be recovered. “This is hugely wasteful expenditure. There were clear signs after the initial alarmist projections that the Covid-19 epidemic would peak in July rather than in August/September as was originally expected. There was no scenario that infections would be surging in January next year, yet a six month contract for 1,000 beds was signed on 1 August with the Joburg Expo Centre which runs Nasrec.”

Meanwhile, Health Minister Zweli Mkhize said that SA reported fewer than expected cases in the move to level 1.  He reiterated that a second wave was likely, and that South Africa would possibly follow the pattern established by most other countries, were a new surge in cases was recorded after a plateau was reached. “The conduct of the pandemic is not the same in all countries. One of the issues that we have been struggling with is ‘what made (South Africa) get the wave it actually did?’,” he said.

News: Comrades Icon Nick Bester in hospital after being attacked with rocks

Senekal: Brendin Horner murder accused back in the dock

The 10 best vegetables to juice for weight loss

The Consequences of Mini Lockdowns