Thuli Madonsela, Former public protector, says it is possible to forget to wear one’s mask when “consumed by thoughts,” and that police are not allowed, by law, to arrest anyone for not wearing a face-covering without issuing a warning first.

Madonsela was reacting to calls for the arrest of Mpumalanga premier Refilwe Mtsweni-Tsipane, who was captured on national TV without a mask during the funeral of minister Jackson Mthembu.

Madonsela also questioned why the premier was not alerted by her team about her mask.  South Africans are required by the state of disaster regulations to wear masks in public to combat the spread of Covid-19, failure to which can result in a fine and/or up to six months in prison.

Madonsela was responding to ANC veteran Darek Hanekom, who tweeted on Monday: “It’s quite straightforward actually: we either arrest and charge people for not wearing masks in public or we don’t. If we do, politicians certainly can’t be exempted. Simple.” 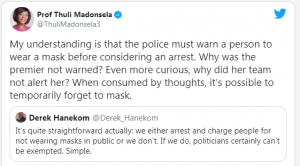 She added: “If police are arresting people without first asking them to wear a mask, they are breaking the law. The regulations require the police to first warn you to put on a mask.”

Madonsela said the offence is in refusing to adhere to an instruction to wear a mask.

“The offence lies in refusing to obey an instruction to wear a mask. That said, this is an important lesson about all of us doing the right thing because it’s the right thing to do and being each other’s keepers. The key to triumphing against Covid-19 is behaviour modification,” she said. 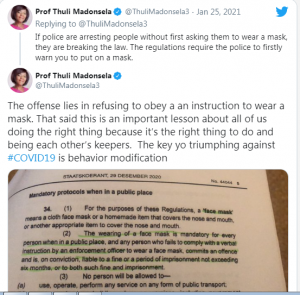 Some acknowledged the clarification, while others said police don’t always issue a verbal warning before conducting arrests.

They argued that the premier did not appear to be “deep in thought”, as she was seen on TV hugging attendees at the funeral, including a police officer, without a mask on.

The premier issued an apology on Monday.

“I have noted social media and media reports revealing moments where I was walking around without a mask. I have since reflected deeply on this momentarily lapse, which I regret profusely. I should have known better as a public figure, and more so attending a Covid-19 funeral.

“To this effect, I have deposited a statement of guilt at the Vosman police station in Emalahleni and where I accepted the necessary fine,” she said. Mtsweni-Tsipane said she bought 1,000 masks which will be distributed in Emalahleni as part of a campaign to raise awareness on Covid-19.

Will Smith smacks Chris Rock on stage at the Oscars

Agrizzi back in court over Bosasa graft