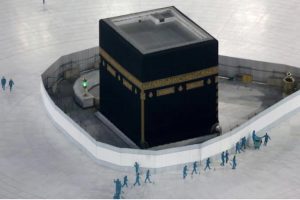 One of the largest annual gatherings on Earth, the pilgrimage, or hajj, to Mecca, will be off-limits to most the world’s Muslims this year due to the threat of the coronavirus pandemic.

After weeks of speculation, and just before the official pilgrimage is scheduled to begin in late July, Saudi Arabia announced that it will not cancel the hajj but rather severely limit attendance to the sacred gathering only to some Muslims currently residing in the country.

In normal years, more than 2 million of the world’s 1.8 billion Muslims travel to Mecca to perform the hajj, which is considered the fifth and final Pillar of Islam.

Every Muslim adult who is financially and physically capable must complete at least one hajj, and for many, it’s the trip of a lifetime.

This year, however, experts estimate that only 1,000 of Saudi Arabia’s 29 million Muslim residents will be allowed to attend.

Although several nations have already prohibited their citizens from attending hajj, the news is still a painful blow precisely because part of the power of the pilgrimage is the way it brings together the global Muslim community, according to Omid Safi, a professor of Islamic Studies at Duke University.

“This hajj decision is an extraordinary piece of news,” says Simon Henderson, a Saudi Arabia expert at the Washington Institute for Near East Policy. “This will knock local economies.”

TRENDING: You can now cook along with SA's top chefs

A note from the Editor

How to make the perfect biltong