Facebook and Twitter both put rules in place before the election restricting content from candidates claiming premature victory.  In social media posts, and then in a speech on election night, President Donald Trump falsely claimed he had already won the election before the full results were in.

Facebook and Twitter immediately labeled Trump’s posts — but they did so in different ways, and the social media giants reacted differently to other claims from Trump. Here’s how they reacted.

In the run-up to the US presidential election, social media giants Facebook and Twitter both said they would take action against posts from candidates that claimed premature victory.

And during remarks at the White House early on Wednesday morning, Trump did exactly that.  “We were getting ready to win this election. Frankly, we did win this election,” Trump said during remarks at the White House.  The full results for the US election are not yet in.  Even before Trump made his speech, he had already signaled on both Facebook and Twitter that he’d claim victory.

Here is how the companies have reacted to the President’s various claims:

Twitter had labelled the tweet within six minutes of it going up, according to Telegraph journalist James Titcomb.

The label meant users have to click through a warning to view Trump’s tweet, and Twitter also restricted the spread of it by stopping users from retweeting it.

Twitter has placed similar restrictions on multiple Trump tweets railing against mail-in voting in the run-up to the election.

At almost exactly the same moment as he tweeted, Trump put up two posts on Facebook.

The first post was exactly the same as Trump’s labelled tweet, while the second read: “I will be making a statement tonight. A big WIN!”

Facebook placed identical information labels next to both posts, reminding users that votes are still being counted and linking them to its Voting Information Centre.

A Facebook spokesman could not confirm to Business Insider exactly how quickly the labels were applied, but said they were put up “shortly” after the posts were published.

Trump also tweeted this second “big WIN” post, but Twitter took no action against it. A Twitter spokesperson told James Titcomb: “As of now we have not placed a warning on this Tweet as the language is vague and unclear about what victory is being claimed.”

At 02:30 ET, Trump gave his White House speech claiming he had won.

As well as saying he won the election, Trump repeated his claims that the election is fraudulent. “This is a major fraud on our nation,” Trump said, offering no evidence. “Once President Trump began making premature claims of victory, we started running top-of-feed notifications on Facebook and Instagram so that everyone knows votes are still being counted and the winner has not been projected,” Facebook said in a widely-shared statement.

Simultaneously, Facebook said it was allowing premature victory to be declared in the case of specific states. 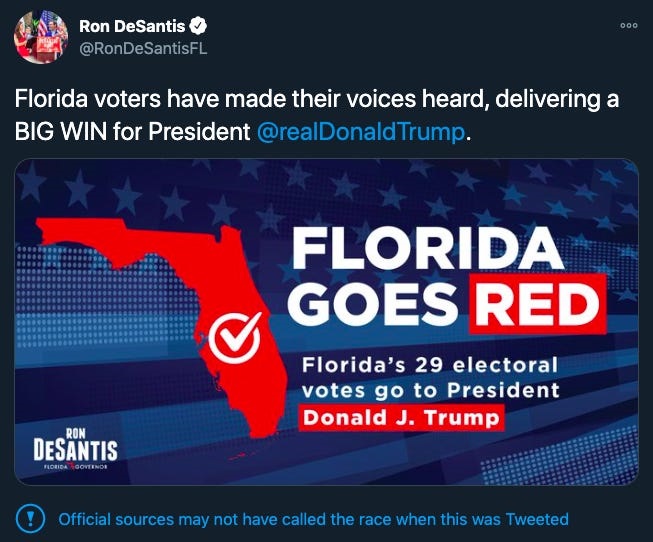 A Facebook spokesperson told the Wall Street Journal the company’s policy on flagging premature victory claims only applied to the overall election result, not individual states.

This clarification came after Florida Gov. Ron DeSantis declared victory in Florida before all the votes had been counted, per the Journal.

DeSantis and the Trump campaign both posted the same claim on Twitter, but Twitter decided to take action and label the tweets, the Washington Post reported.

JUST IN: Schoolgirl kidnapped outside school in Mayfair

London’s Tower Bridge reopens to traffic after being stuck