How does SA’s vaccine rollout compare with the world

A quarter of all South African adults have received at least one dose of the Covid-19 vaccine. This represents some 10 million people who have either received their first dose of the Pfizer vaccine or their one-shot Johnson & Johnson (J&J) jab.

South Africa’s vaccination rollout has reached another important milestone, with 25% of all adults – aged 18 and above – being at least partially vaccinated against Covid-19. Of the 10 million people vaccinated by Monday, around 65% have been fully vaccinated.

The bulk of these vaccinations have been administered in the past two months, as part of a phased rollout that started in February. Initial supply constraints, the Beta variant’s evasiveness, and regulatory issues kept vaccination numbers low until July.

Between February and the end of June, South Africa administered around 3.2 million jabs. In July alone, with the rollout extended to those aged 50 and above – later to those aged 35 and above, and restrictions on walk-ins lifted – around 4.5 million doses were administered. National Department of Health, SAcoronavirus. Latest vaccine statistics as at 17:00 on 5 September 2021.

South Africa’s daily vaccination rate has continued to improve since the rollout was opened to all adults on 20 August. A million doses were administered in just four days – the quickest rate recorded since the rollout began – over the past week.

Even though South Africa is opening more vaccination sites with adequate staff and has a steady supply of doses, it’s struggling to meet its short-term target of 300,000 daily vaccinations. To combat vaccine hesitancy, the government is even considering reopening stadiums, musical festivals, and nightclubs to those who have been fully vaccinated as a form of “encouragement”.

And South Africa – like the rest of the continent – is still woefully behind the rest of the world’s vaccination rate, due, in large part, to vaccine hoarding by first-world nations. Even on the African continent, South Africa, with just under 17% of the total population having received at least one dose of the Covid-19 vaccine, doesn’t hold the top spot. That belongs to Morocco, which has administered more than 34 million doses, covering more than half of the country’s total population, according to Our World In Data.

Tunisia and Zimbabwe’s vaccination rate, relative to the population size, also outpaces South Africa’s. This doesn’t include vaccinations in the island nations of Seychelles and Mauritius – with low populations – which have administered at least one dose to more than 74% and 64% of the population, respectively.

Still, South Africa is far above the continent’s average. Less than 6% of Africa’s population has received at least one dose, compared to more than 40% of the world’s population. Japan, a country of 126 million people, has administered more vaccine doses than all African nations combined. 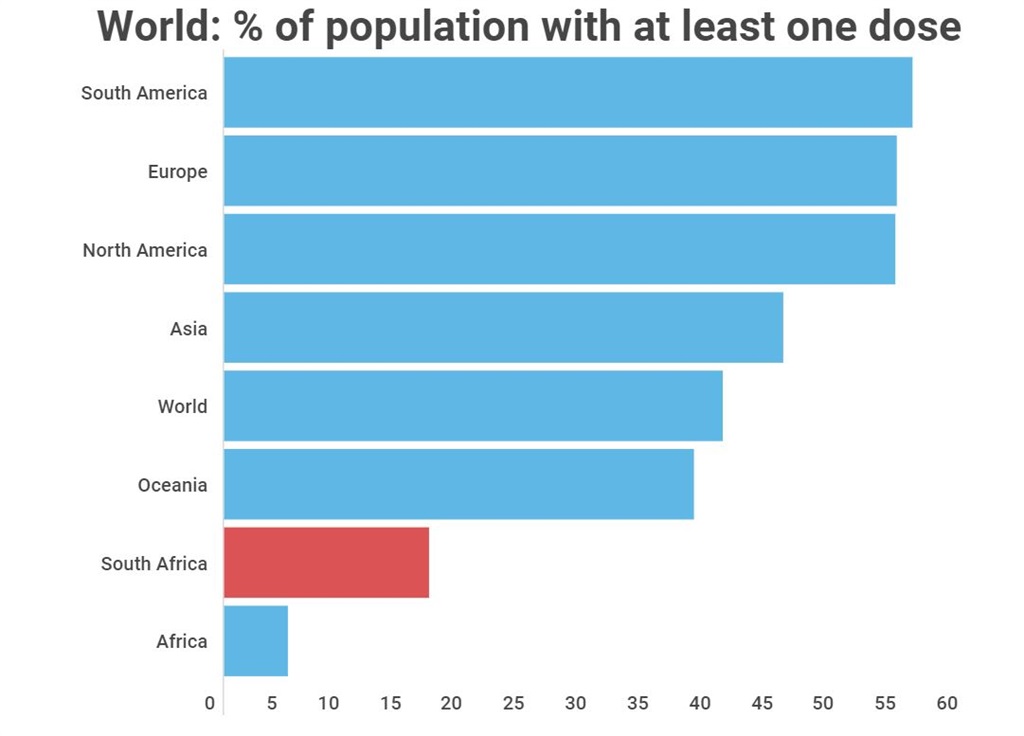 But even on the continents with best vaccine coverage, there are a few outliers; countries with vaccination rates comparable to South Africa’s own.

Less than 13% of all people living in Ukraine have received at least one dose of the Covid-19 vaccine. Neighbouring Belarus is doing better, and is slightly ahead of South Africa, reaching more than 17% of the population. 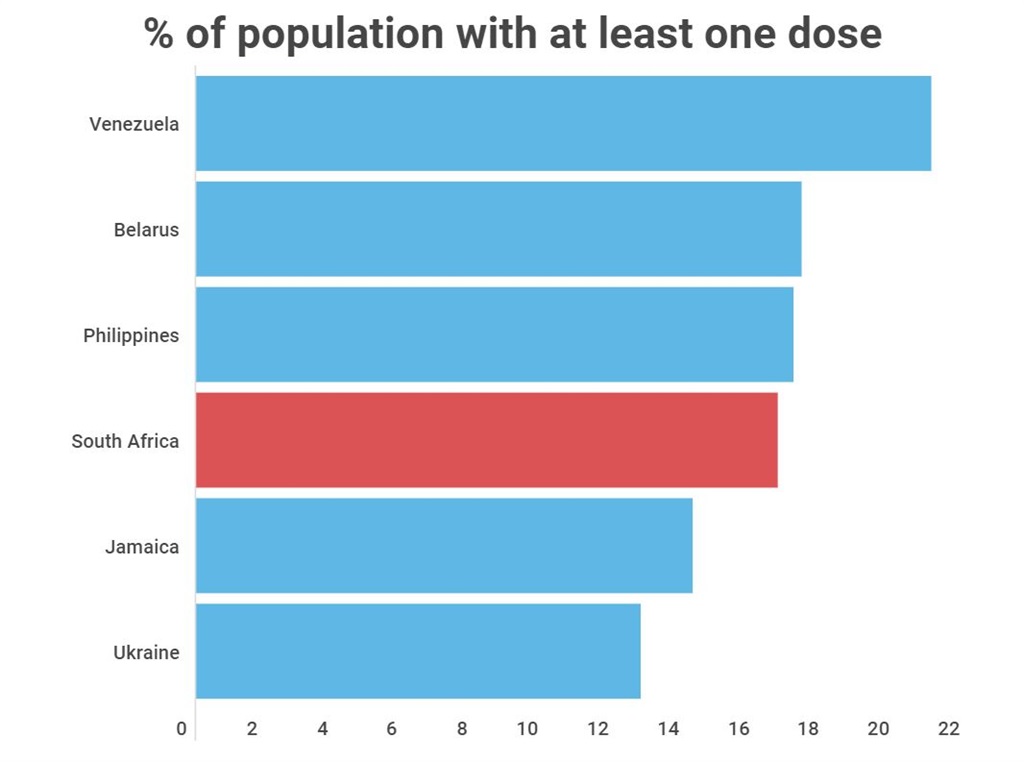 In Jamaica, the total coverage has passed 14%. The Philippines’ vaccination rollout has managed to reach 17% of the population.

The United Arab Emirates (UAE) is one of the countries with the highest vaccination rates, with around 87% of the population having received at least one dose.