How do you eat a mango?

Do you peel away the skin to reveal the ripe, juicy flesh and just get right into it?  Never mind the juice dripping everywhere and spattering on your clothes? Or do you cut it into sections and proceed to use a knife and fork to avoid all of the above?

The topic became a fierce debate this weekend when Finance Minister Tito Mboweni innocently posted a series of pictures on Twitter of him tucking into a mango.

Proud of the fact that the fruit was from the region where he grew up, Mboweni wrote: “Tzaneen is rich with healthy mangoes. Delicious! Most households have mango trees!!@golimpopo.” 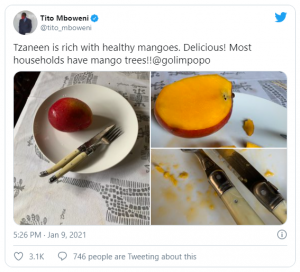 It didn’t take his followers long to comment on the plating of said mango. It appears Mboweni prefers to eat his mango with utensils, causing many to make fun of the fact.

“I understand the knife Mara iFork pho Tata?” asked one online user.  Another jokingly said: “The knife was probably dysfunctional here” referring to the hard pit in the centre. 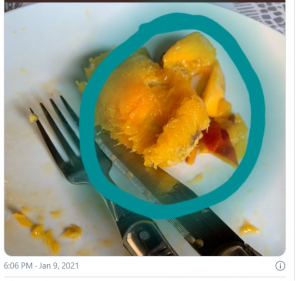 But the finance minister was in no mood for jokes. He soon fired off a response, saying: “What is the problem? Oksalayo the mango is in the tummy! How one enjoys it is one’s preference. Hayibo!”

His acerbic clap back seemed to put many in their place, while others agreed with him with “good question” and “so very true” responses. 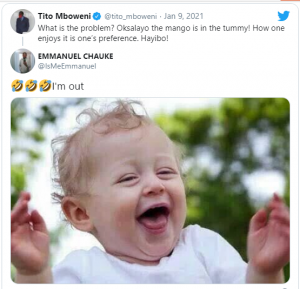 COVID-19: Production halted at 7de Laan Rhythm City and Scandal due to Covid-19

Lockdown: Restaurants will be blocking streets next week.

This is how South African Soaps are adjusting to Covid-19

Over R1m Savings Passed on to St Martin’s Parents

SA’s COVID cases ‘on downward slope’ – but is it enough to ease lockdown rules?

Another ‘wet coal’ fiasco for Eskom?

Ivermectin still not approved by SAMA

Disability grants ‘to be reinstated’ – but only for these people

The “missing” Fourways hippo is alive

550 Workers Suspended at SAB due to Prohibition