The unvaccinated do not have more rights than others

If you stay in Fourways and your bushes rustle pay close attention, it might be the hippopotamus that is on the loose. 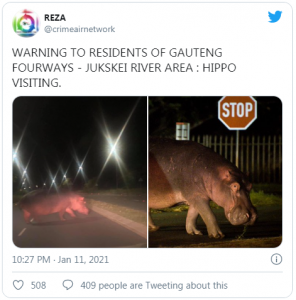 Conservation officials are now looking for the animal, which is believed to be hanging out near the Jukskei River.  In a statement on Monday, the department said it received an unusual call on December 29 from a member of the public who had sighted a hippo near the densely-populated and plush Fourways suburb.

“The department has alerted the SAPS together with the local conservation practitioners in the area, and a private security company who assist on wildlife issues. [The department] is collaborating with these stakeholders to monitor the movements of the hippo. To date, the hippo has not caused any damage nor posed a threat to any human or animal lives.”

Hippos are mainly herbivores, but they have been known to become aggressive especially when threatened. The hippopotamus is considered the world’s deadliest large land mammal. These semiaquatic giants kill an estimated 500 people per year in Africa, according to the BBC. Hippos are highly aggressive and are well-equipped to deliver considerable damage to anything that wanders into their territory.

For example, in 2014, a hippo attacked a small, unsuspecting boat filled with Nigerian school children, killing twelve students and one teacher on board, an Australian news outlet reported. Conflicts between humans and hippos also occur when hippos wander onto land in search of food.

Officials are calling on people not to approach the hippo if they do come across it but rather to report its location.  According to the provincial department, the sighting took place in Chartwell near the Jukskei river.

It is believed that the hippo originates from the Hartbeespoort Dam area and that, and if left in peace, will return there voluntarily.

“This is a wild animal that generally stays in water for the most part of the day and feeds on grass at night, however there are instances where the animal will be out of water during the day, but this is not common,” the department said.

The department said people should be vigilant of the hippo and to be very cautious not to approach or provoke the animal in any way.

“The hippo should not be fed, so that it is discouraged from staying in the area. Therefore, the animal should not be provoked or tampered with. Like any other wild animal, the hippo is moving between the Jukskei river (Chartwell, Fourways), Crocodile river and Hartbeespoort Dam (the place of origin and its habitat) on a regular basis,” the statement read.

The department said it had hatched two options of dealing with the animal, which has not been spotted this week.

It said it would monitor the hippo’s movements and should it pose an imminent threat to human life, there will be no option but to consider putting it down.

It said the other option was to capture the animal and move it to an area where it there would be less of a safety issue.

Is your dog a biter?

The unvaccinated do not have more rights than others

Nails for babies rub South Africa up the wrong way