Bus operator Greyhound and its subdivision, Citiliner, closed all operation on Sunday 14 February 2021, leaving at least 700 people without jobs. The company that had been operating for over 35 years was one of the first coach operators to begin services in South Africa. Their extensive route network covered all major cities in the country, including Johannesburg, Cape Town, Durban, Port Elizabeth, East London, Vereeniging, and Pretoria.

They also operated international services to Harare and Bulawayo in Zimbabwe and Maputo in Mozambique.   The company announced its decision to close down at the beginning of the February, saying the COVID-19 outbreak has had a negative impact on its financial stability.

“Since 1984 we’ve brought you South Africa’s favourite luxury coach solution, connecting cities as old the country itself and towns as brilliantly curious as the cultures that connect us.”

The company transported over 800,000 passengers every year covering 25 million kilometres. The company boasted luxury buses and offered routes not only to the major cities but to many of the smaller towns along the way.

“We are the most luxurious bussing solution this side of equator, available with Dreamliners built to 5-star specifications and an experience defined by professionalism, punctuality and good ol’ fashioned politeness.”

Today, hundreds of drivers and other employees are faced with unemployment. Songezo Sokhweba from eNgcobo in the Eastern Cape is among the many Greyhound workers who lost their jobs.

“It’s sad that I lost my job at this company.Them closing down, it’s very bad because we did not plan for it and it’s going to affect our families badly,” says Sokhweba. 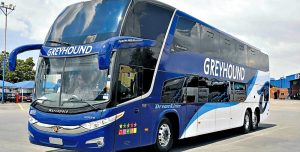 Passengers who had booked for trips after today, can contact the company for a refund of their tickets. Passengers who have used the Greyhound and Citiliner services in the past have voiced their concerns about the plight of staff after the closure.  One passenger, Rochelle Titmus says passengers have alternatives, but the workers face a difficult situation.

“I am very sad about it. I used Greyhound for many, many years, travelling from Joburg to Cape town;  Cape Town to Joburg; Durban to Cape Town. I have been travelling all around and to see this company going is sad. I only used them. Now, I have to use other companies,” Titmus says.

Workers’ union, Numsa, has described the closure of the company as a huge blow to the workers and their families.

“We cannot afford as a country to lose any more jobs as this worsen conditions for the working class and the poor,” says the union.

One worker reportedly supports at least five to six extended family members in South Africa and will now be faced with near impossible circumstances.

News: From the Desk of the President