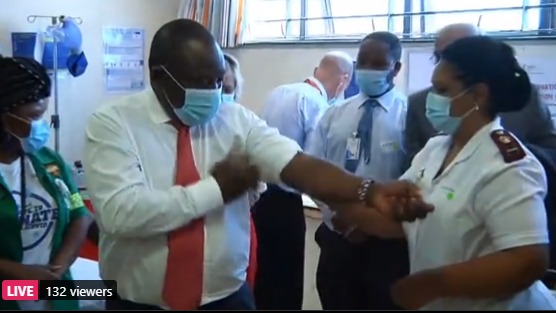 Cape Town nurse Zoliswa Gidi-Dyosi became the first South African to receive the Johnson & Johnson Covid-19 vaccine at the Khayelitsha Hospital on Wednesday.  Gidi-Dyosi received her jab after a consignment of 80 000 doses arrived from the US on Tuesday night.

Gidi-Dyosi was part of a contingent of healthcare workers that received the first doses of the Johnson and Johnson jabs at the Khayelitsha district hospital in Cape Town on Wednesday.

Gidi-Dyosi is a registered nurse and midwife.

She was joined by her colleagues Dr. Sa’ad Lahri an emergency physician, Mavuyo Mpambani a housekeeping healthcare worker and Cwengisa Dadirai, an admin clerk.

Ramaphosa, who was wearing a suit, rolled up his shirt and took the jab on his left arm. After receiving his jab, he was in good spirits, joking with the nurse and he signalled with a thumbs up.

South Africa is kicking off its vaccination programme with Johnson & Johnson vaccines after it took a decision to put AstraZeneca vaccines on hold last week.

South Africa had procured one million doses, but a study raised concerns about the efficacy of the AstraZeneca vaccine dealing with the 501Y.V2 variant, which has become the dominant Covid-19 variant in South Africa since December.

In the next four weeks, South Africa is expected to receive 500 000 more Johnson & Johnson doses.

The Rage Parties Raging On