Ekurhuleni Mayor, Mzwandile Masina in hot water over his tweet 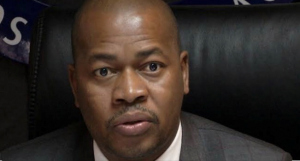 Masina stirred up a storm on Sunday after supporting Malema’s call to let the “white economy collapse.”

“I fully agree with my friend on this one @Julias_S_Malema. Until we nationalise all commanding heights of the economy- we need to restart this economy and make sure it favours the majority. This can’t be sane again,” said Masina in his tweet. 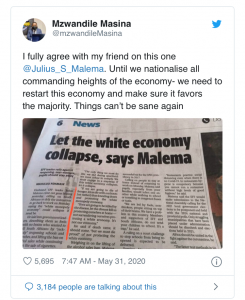 The ANC has released a statement reprimanding Masina for his stance, calling its leadership to be mindful of what they post and to keep in  mind that nationalising the economy was not ANC policy. 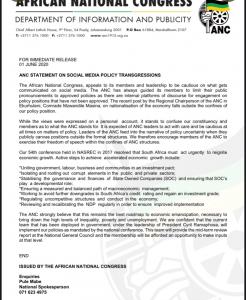 In reponse to the ANC, Masina said he would accept “without hesitation” should the ANC remove him as mayor over his views.

Before deactivating his twitter account Masina said, “My views are more important than being gag by whites. I’m not a coward. Kill me if you can, I fear no one.” 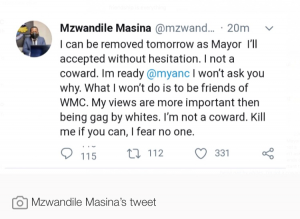 Julius Malema, his friend, has since defended him warning Masina against trusting “these ANC people”.

Julius said in a tweet, “They suspended the Twitter Acc of @mzandileMasina because they can’t tolerate the radical views of the black man. I know you belong to them Zwai but never trust these @MYANC people, young independent thinkers have always threatened them. Never be discouraged black child.” 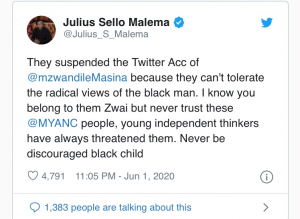