‘Did anyone die? Please call my wife’: sobbing tanker driver after fatal N1 crash in Joburg

“Was someone injured? Did anyone die? Can someone please call my wife,” a sobbing chemical tanker driver asked first responders at the scene of a fatal crash on the N1 in Johannesburg.

The crash claimed two lives and left two others, including the truck driver, injured when the tanker collided with two cars on the N1 northbound between William Nicol Drive and Rivonia Road on Tuesday.

Gerhard van Rooyen, who witnessed the crash, was driving with his wife next to the tanker when they heard a loud bang. It was one of the truck’s tyres.  Van Rooyen said the truck was in the second last lane when the tyre burst.

“We heard the tyre burst and the next moment we heard a loud bang. Due to the tyre burst the truck veered a little to the right and I had to dodge it and then everything followed after that,” he said.

“When the truck started rolling and hit the embankment, the tanker became airborne.

“We tried to get away as fast as possible because we all know what happens when a tanker rolls and the possibility of it going up in flames. My main objective was to keep my wife safe.”

ER24 spokesperson Russel Meiring said earlier the accident happened at about 9am.

“A chemical truck was lying on its side on the side of the road while two light motor vehicles were a short distance away, one alight and another on its roof.

Meiring said a man pulled from the burning vehicle had died while a woman was in a critical condition.

Meiring said the truck driver was found lying on the highway in a serious condition and a woman from the overturned vehicle escaped with minor injuries.

Van Rooyen said they stopped just after a bridge on the highway.

“We waited a little because we thought the tanker was going to explode. Immediately there was fire and smoke, but it turned out the fire was caused by the [Volkswagen] Polo which collided with the back of the trailer.”

Van Rooyen walked back to the accident scene. 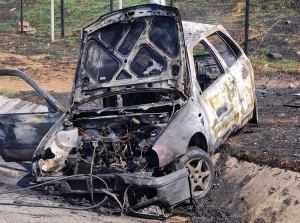 “By the time I walked back, people had already pulled a man from the burning vehicle and he died on the cement next to the tar road.”

He said the female passenger had also been pulled from the vehicle and was taken to hospital.

“Petrol was spattered all over the road and was burning. There was nobody there for a long time to extinguish the fire and motorists jumped in with fire extinguishers.”

Van Rooyen said the truck driver, who he described as “big and tall”, asked about the safety of other motorists.

“The first thing he asked us was if anyone died and were other people injured, but we didn’t elaborate on that because he was in shock. The second thing he asked was if we could contact his wife,” he said.

With tears running down his face, the driver of the tanker told van Rooyen he had lost his son in a car crash.

“He told us two years ago he lost his son in a car accident. He was crying like a baby.”

Van Rooyen hailed the truck driver as a hero because he “veered off the road” to avoid total carnage during peak hour traffic.

“I saw how he was fighting the steering wheel to get it away from lots of vehicles. This could have ended in extreme chaos if he didn’t do what he did.

“It was an extremely traumatic experience for us.”

Netcare and Wits team up for vaccination site

Malema Refuses to be part of the “White man’s agenda”

Special requests for Covid-19 vaccines are open, here’s who can apply

News: 10 People including an EFF Member of Parliament, have been arrested.