Eskom employees were on Sunday “held hostage” by community members in Zonkizizwe, Ekurhuleni, and allegedly forced to unlawfully restore power supply in the area, according to News24.

The power supplier has been implementing load reduction in a number of areas in Gauteng to avoid overloading in “high-density areas that are prone to illegal connections, meter bypasses and vandalism of electricity infrastructure”, according to a statement.

Eskom spokesperson Sikonathi Mantshantsha told eNCA on Sunday two of its technicians were kidnapped by residents and forced to restore a transformer that had been shut down owing to non-payment and illegal connections.

The technicians managed to escape safely after the ordeal that lasted more than an hour.

Mantshantsha told the broadcaster one of the technicians, who happens to live in the area, was followed home by a crowd who surrounded his house.

Mantshantsha said this was a criminal matter,  both the kidnapping and illegal connections and that Eskom would be pressing charges against the community members involved in the incident.

The issue of illegal connections has led to conflict between disgruntled residents and law enforcement officials in other areas as well. 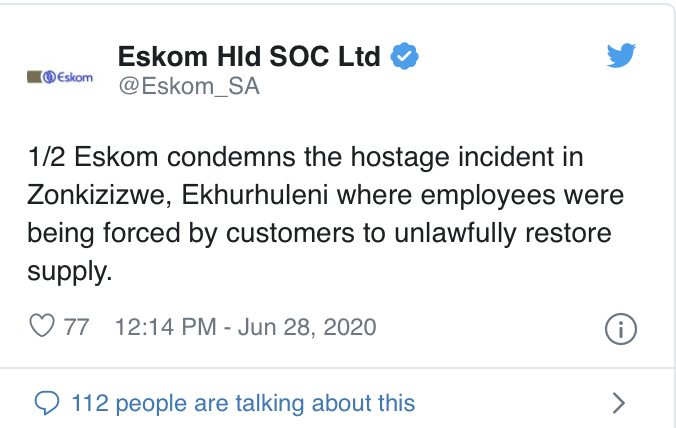 Mantshantsha told eNCA Eskom had seen an increase in hostilities against its employees.

He said employees were pelted with stones in Diepsloot last week as they were removing illegal connections, while other Eskom employees were kidnapped in Bronkhorstpruit in the same week.

On 15 June, two security guards were shot dead in Philippi East, Cape Town, while escorting Eskom technicians out of the area, News24 reported.

Eskom tweeted that it was committed to protect its employees and assets and would not allow communities to put undue pressure on Eskom or its employees in any way.

“Illegal connections and tampered meters will first be removed and audits conducted before supply is restored,” the power utility said.

Covid-19: Teachers forced to choose between jobs and safety amid rising cases at school