Crèche children in Boksburg ‘terrified’ of tigers next door, but it seems no laws broken

Teachers at a daycare centre in Boksburg were shocked last week when, during outside playtime, they looked up and saw a white tiger watching them.

The tiger is neighbour’s pet and was seated on a jungle gym overlooking the crèche. Since then, playtime on that side of the crèche grounds has been stopped.

The owner of the crèche — who asked for her name and that of the school to be withheld — said they had since learnt their neighbour had acquired two large white tigers. She has taken several pictures of the tigers from her premises.

Since spotting the animals, the crèche owners have had to cage in the children out of fear the tigers could jump over the fence.

“That fence is not high enough and the tigers will jump. If they don’t jump into our school, they will jump into our other neighbour’s house and, just across the road, there is an old age home. There are approximately four schools in this street so this is a danger to everyone living in the area,” the crèche owner said.

She said she told the children’s parents about the tigers and since then several children have stopped coming to school.

She has approached the owner of the tigers, wildlife organisations and the local councillor with the hope she can receive assistance. She said this has yielded no results because there is seemingly no legislation in place around keeping tigers.

“At this stage, we feel like these wild animals have more rights than us,” she said.

Matthew and Anneline Kruger, through their lawyers, said they complied with all the regulations in Gauteng regarding the keeping of exotic animals on their premises.

The attorneys representing the couple said there was nothing that precludes their clients from having a wild animal on their property.

The City of Ekurhuleni was not reached for comment. The story will be updated once their comment has been received. 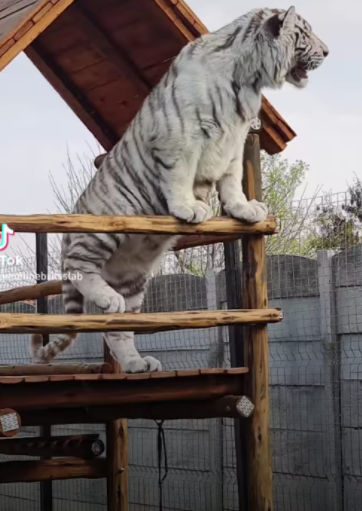 On social media, neighbours and concerned residents have clashed with the owners of the two wild cats.

The animals’ owner, Annelise Kruger, social media pages contain pictures and videos of the two big cats. In some videos, the tigers are seen drinking water from a plastic pool and in others she takes the leashed animals on walks. The tigers are also captured diving into a swimming pool and lying on a bed next to her.

Kruger referred all queries to their lawyer, who was not immediately available for comment.

Animal welfare organisation Four Paws said it had been alerted about the tigers this week.

“The images are appalling, but we are not shocked by them,” said Four Paws director Fiona Miles.

“Tigers have very little protection under SA law, despite being considered an endangered species. This is particularly true in Gauteng, where such cases of private keeping are prevalent.”

According to Four Paws, there are around 1,500 tigers kept in captivity in SA, though there are fewer than 4,000 left in the wild.

“The department of forestry, fisheries and the environment announced earlier this year that it plans to outlaw captive lion breeding, keeping lions in captivity and stopping the commercial use of lions or their derivatives, but tigers are not included in this draft plan.

“Many tigers are kept in suburban homes for reasons such as social media exposure. Despite being hand-reared and appearing playful, the cats are wild animals, sentient predators and keeping them in these conditions is hugely exploitative. Exercise and socialisation with other individuals of their species are not available to them, and there is the risk they could pose a danger to others unless adequate safety measures are taken,” Four Paws said.

Miles called on the government to include all big cats in the legislation and appealed for action urgently to complete the process to bring new laws into effect.

“This case highlights why we need to bring the captive breeding of big cats to an end,”  said Miles. 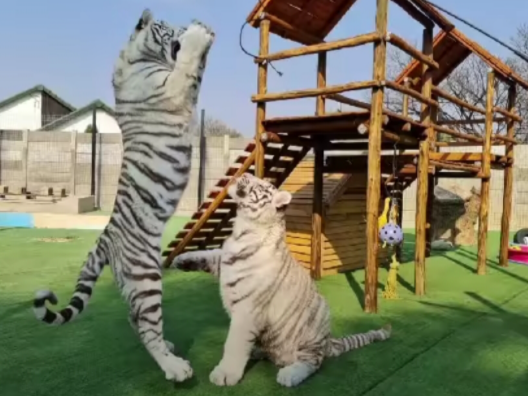 The National Council of SPCAs (NSPCA) said its hands were tied. It said it had conducted an inspection and issued a warning for contraventions in terms of the Animals Protection Act, but there was no guarantee this would have an impact.

“Unfortunately, it is not in the hands of the NSPCA to issue permits for the keeping of any wildlife. This is handled by Nature Conservation [a division of the Gauteng department of agriculture and rural development], and they set the requirements needed to obtain a permit, which makes it legal for people to own exotic wildlife,” the organisation said.

“In the case of tigers in Gauteng, an import permit is required when the tigers originate from outside Gauteng. It all seems a little trivial when you consider tigers are an appendix 1 listed animal in terms of the Convention on International Trade in Endangered Species of Wild Fauna and Flora [Cites]. Very restricted conditions exist for trade in  tigers.”

Regarding the conditions in which it found the tigers, the organisation said: “This is certainly not the way these animals should be kept. We understand the area the tigers are being housed in would not comply with the draft [regulations] for Gauteng zoo norms and standards, wherein the minimum area for a tiger to be housed in is 600m2.

“Tigers in residential areas are not a good mix. Tigers are exposed to additional and unnatural stressors in terms of noises, smells, dogs, cats, humans and air pollution, to name a few. Initially these may serve as enrichment to a degree, but thereafter, simply additional negative stress. They belong in the wild. Not only is this extremely unfair and unjust toward the animals, it is also unethical and a risk to everyone exposed to the animals,” the NSPCA said.

There were also risks to the owners, the organisation said, as these animals could carry pathogens that transmit from animal to human and vice versa. “These include ringworm, herpes, rabies and other parasitic and bacterial infections.

“How the department of health can allow this is beyond understanding, and when it comes to the inherent danger of attack by a tiger on a human it is beyond comprehension the municipality allows such keeping of tigers,” the NSPCA said.

The crèche owner said, the tiger owners had approached her in March, asking if they could extend their wall. She said she was told this was because they wanted to build a flat-like dwelling in their backyard for their children, and required the high wall for safety.

But she suspects this was for the tigers.

“We first saw the tigers last Thursday. I heard people talk about there being tigers, but we had never seen them.”

Health: Tips to boost your immune system during Covid-19

Mandela Day: How you can help