Covid-19: Your hand sanitiser might not be keeping you as safe as you think

If tests on a sample of hand sanitisers conducted by a private, accredited laboratory in KwaZulu-Natal are anything to go by, almost half are not complying with the government’s regulation that alcohol-based hand sanitisers must contain no less than 70% alcohol, TimesLive reported.

According to TimesLive, after being confronted with the results, one company said it would remix the bottles and donate them to charity.

One of the products that did not meet the required standards was used to sanitise shoppers’ hands at a clothing store.

Among those that met the requirements were Woolworths’ own brand and sanitisers supplied to Pick n Pay and Dis-Chem.

A microbiologist has warned that sanitisers not meeting the required standards could result in a serious public health threat during this pandemic.

The sample of 11 hand sanitisers was tested by SciCorp Laboratories in May: nine of them were bought from retail stores in the Pietermaritzburg area and two were samples of sanitiser sprayed on customer’s hands at store or mall entrances.

The lab is accredited by the SA National Accreditation System (Sanas).

The regulations published in the government gazette at the end of April state that hand sanitisers must contain at least 70% alcohol, as recommended by the department of health, and most hand sanitisers on the market carry label claims to that effect.

The lab tested for three forms of alcohol: ethanol, propanol and isopropanol. All but one of the store-bought samples claimed to contain more than 70% alcohol; one made no claim at all.

Five of the 11 samples were found to contain less than 70% alcohol. 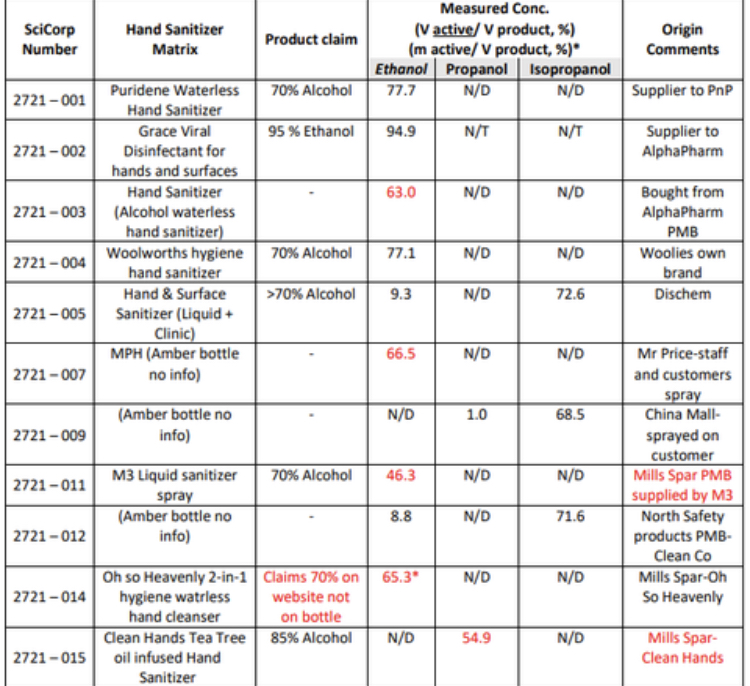 While the WHO and the SA government have chosen 70% as the alcohol requirement for hand sanitisers to be effective against the coronavirus, the CDC recommends that alcohol-based “hand rubs” must have at least 60% ethanol or 70% isopropanol to do the job.

To identify SABS-approved products, a list of manufacturers is provided here.

Big Mac Index: The rand is now the world’s most undervalued currency

Protocol when getting home

A note from the Editor