Covid-19 News: 200 taxis have been fitted with compliant features.

Ventilator spacers (which are fitted into windows), an airtight plastic barrier seal between driver and passengers and sanitiser stations next to the sliding doors are among the new features.

So far 200 vehicles at taxi ranks in Johannesburg have been equipped, at a cost of R1,000 each.

The R6 million project is led by the non-profit organisation Supplier Development Initiatives (SDI) Force, which was founded by Ramaphosa, son of President Cyril Ramaphosa, and Brad Fisher, in partnership with FNB and Bridge Taxi Force.

The window ventilator spacers allow fresh air circulation into the taxi even when it is cold. The spacers let the air in and out through strips, which are placed in the space of an open window.

New regulations that allow minibus taxis to be 100% full on local trips came into force last week.  By law, taxis must keep their windows 5cm open on both sides. 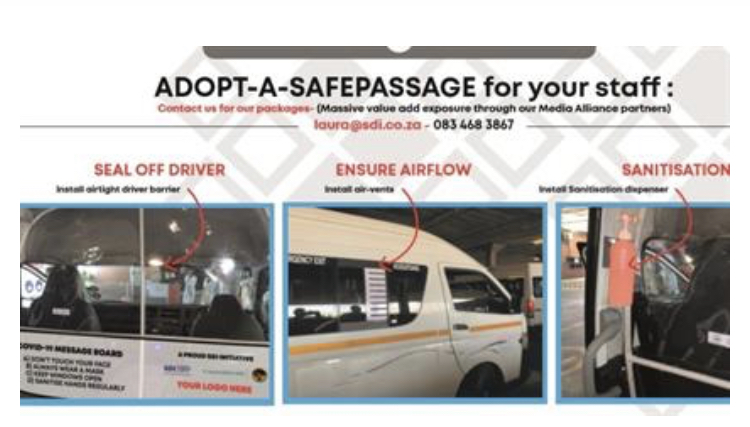 “If you think about a taxi with the windows closed, whether it’s half full or 100% full and people have their masks on, if you don’t open the windows and the virus floats around, there will be enough viral load after a 20-minute trip to get you sick,” said Fisher.

Earlier this month, the World Health Organisation acknowledged for the first time that it’s possible the coronavirus may be airborne and transmitted through aerosols, which can linger in the air over several metres. Previously, the WHO maintained that the virus is generally spread from person to person through respiratory droplets, which are heavy, and fall to the ground.

This means that the coronavirus may be passed around in the air across a poorly-ventilated space, even where people are spaced more than 2 metres apart.

An airtight plastic barrier between the driver and passengers is another one of the Covid-19 compliant features. It also prevents infected particles from travelling from driver to passengers.

“The driver is very, very important because (he) is seeing about 2,000 people a month. You’ve got to get the driver separated… because if the driver gets sick, they make everyone else sick.” said Fisher.

But by the end of May, the pair identified that spraying people in the taxi rank alone was not enough and have now opted for Covid-19 compliant technology in taxis instead.  SDI Force has also been involved in providing food parcels and personal protective equipment.

In the past, he has courted controversy with his close ties to the corruption-accused company Bosasa.

Municipalities: 18 of the worst money horror stories in SA