News: You can now set up your office in a hotel.

News: South Africa just got a new “Pap en Sous” meal in the shape of a stick!

Could the Government impose a curfew? 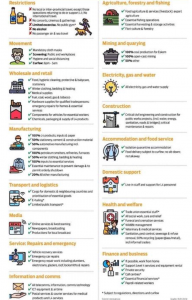 These draft proposals are now open for the public to comment, with the final regulations to be announced on Thursday.

The legality of this impending curfew has been questioned by two experts of our constitutional law, while John Steenhuisen,

the DA’s interim leader and leader of the opposition in the National assembly has rejected it.

According to Brigadier Vishnu Naidoo, police spokesperson, they were sufficiently resourced to police the new curfew.

“We will rearrange ourselves if needs be and look at patterns, identify area where there is greater non-compliance where we will increase capacity,

“ Naidoo added, saying this did not mean areas where compliance was good would be left unattended.

Even though the hardlock down ( Level 5) will end on Friday, Dlamini Zuma has warned that South Africa could quickly return to Level 5 if the public did not adhere with the strict regulations. “We will be looking at data on a weekly basis.” Dlamini Zuma said.

These following rules are unlikely to change,

Which sectors will re-open on 1 May?

Patel said, Level 4 regulations will see 1.5 million more workers in the country to join those who have been working in essentials services since lockdown, but adding, “ We want people to stay at home.”

This is bad news for sport, as the country’s biggest sporting codes were also dealt with a heavy blow. The rugby and football’s hopes of resuming the Super Rugby competitions and Absa Premiership, to be held behind closed doors – but televised, being rejected.  South African sports rely on advertising and broadcasting deals to stay afloat.

Covid-19 News: 200 taxis have been fitted with compliant features.

Lockdown and the payment of school fees

Are people being held against their will at Emperors Palace?

News: You can now set up your office in a hotel.

News: South Africa just got a new “Pap en Sous” meal in the shape of a stick!

News: Ramaphosa told to lift the ban on cigarettes and alcohol by the NCCC

News: Angie dismisses allegations that her family is involved in Covid-19 tenders

Could this COVID-19 ‘health passport’ be the future of travel and events?

News: Take a virtual walk with a herd of elephants on World Elephant Day

News: What to do if you are a victim of SIM-swap fraud

News: Clarity around how the lockdown alert levels are calculated