Breaking News – Julius Malema “We are going to get them”

Julius Malema, EFF leader, vowed today that the party’s planned protest rally in Senekal will go ahead.  Farmers stormed the Courthouse on Tuesday last week demanding that the two accused in the murder of Brendin Horner be handed over.  One man was arrested and has been charged with attempted murder and damage to state property.

Minister of Police Bheki Cele and State Security Minister Ayanda Dlodlo visited the area today to convey their condolences to the Horner family and to initiate discussions with the local farming groups.  Malema was speaking outside the Randburg Magistrate’s court where he and EFF MP Mbuyiseni Ndlozi are facing charges of assaulting a policeman. 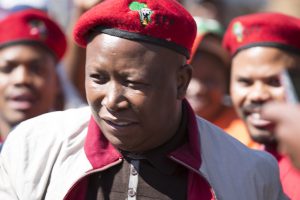 Malema vowed that the red berets and the party’s ground forces would be in Senekal to protect state property from white protesters.  “We are not scared of them.  We are going to get them on Friday. We are going to face white men face to face,” Malema said.  Outside the courthouse Malema took a swipe at the police who maintained their presence as he addressed EFF supporters gathered there.  “You cowards allowed white people to burn your cars.  You are cowards.  We are not cowards.  We are getting them come Friday.  And there is no one who can stop us,” he told supporters outside the courthouse.

Meanwhile the DA has accused Malema of incitement to violence with his Tweets, and laid criminal charges against him.  The DA also lodged a complaint against Malema with Parliament’s ethics committee.  Malema said that the EFF would not be in Senegal to protect those accused of killing Brendin Horner, but to confront white arrogance and criminality.  “We have no business with murderers.  That black man who killed a white man must go and rot in jail.  it is not our problem.  we do not protect criminals but we will never allow white men to show us what they showed Mandela during the negotiations.  That thing must have ended here.  The white arrogance should have ended there.”

Could this COVID-19 ‘health passport’ be the future of travel and events?

GAUTENG: Harder lockdown could be in the cards.

News: Beware of accepting your SARS auto-assessment without checking it