Benoni News: “Butcher of Benoni” can no longer practise as a plastic surgeon.

After nearly a decade of fighting a string of botched bodies and shattered lives left in his wake, the “Butcher of Benoni” can no longer practise as a plastic surgeon, The Star reported.

This week, the Health Professions Council of South Africa (HPCSA) finally struck Dr Luke Gordon off the roll, but it’s a little too late for his victims who had fought the regulatory body to get justice.

Gordon, a plastic and reconstructive surgeon, was charged with several counts of negligent performance of cosmetic procedures of 14 patients. He was found guilty of unprofessional conduct on nine counts and not guilty in five counts. Over the years, he had paid about R4.5million to patients whose operations he botched. It is believed that some of his patients started complaining to the HPCSA as far back as 2004.

One of the victims, Myrna Bothma, paid more than R60000 for a tummy tuck, liposuction and a breast lift in 2011. After surgery, she had sagging breasts with big scars underneath, nipples that were scarred, and more scars on her belly button. Her tummy was big and the liposuction had not been performed. She reported the matter to the HPCSA in August 2011 and received no joy. In 2013, she and a group of other patients took the HPCSA to court to force them to act against Gordon.

“It took them seven years to deal with 14 cases. I don’t think they had our interest at heart. He was just unstoppable and the HPCSA took 16 years – from 2004 – to get him off the roll.”

She sued him in 2014 and they settled out of court for an amount of R300000. He was sequestrated and Bothma said she is now supposed to get only R2500 because Gordon is bankrupt.

Bothma said: “I have never had the finances to get more surgery. Even if I did I will not let anybody touch me or destroy my body any further. In my mind, I feel that they will now botch it again. I will not trust anyone.

“It has been 10 years already and I have to cope with it. I can’t destroy myself anymore. My self-image is down the drain but I have to move on with my life. He is a narcissist and a liar and doesn’t acknowledge what he did.”

Another patient Heugene Murray had wanted calves that were proportionate to his bodybuilder’s physique. Exercise had done nothing, so he approached Gordon for calf implants in both legs. 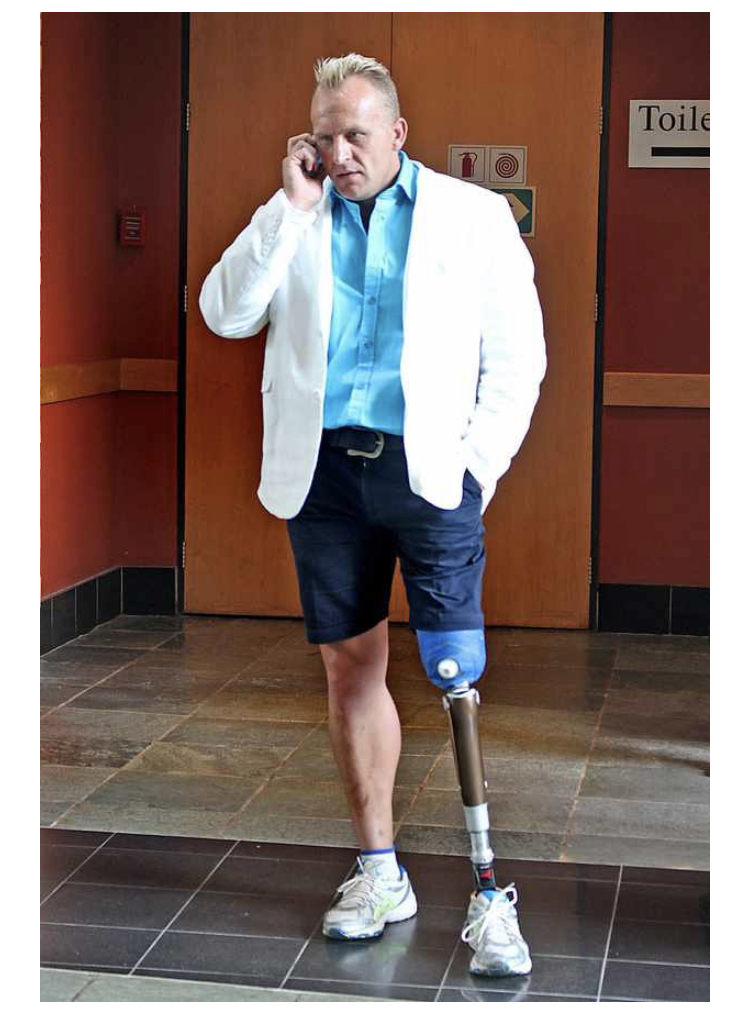 There was no feeling in his left leg after the operation, and it turned purple and had to be amputated.

Murray picked up the pieces of his life and is still bodybuilding, representing South Africa in the 2015 Paralympics in javelin and is an athletics coach.

“I am relieved but not happy with the outcome. I want him to go to jail. He is a danger to people. How can I get arrested for not wearing a mask and he can go round playing with a knife and ruining people’s lives without going to jail?

“Why didn’t the HPCSA act from the first case? I am disabled. I lost my leg and career. Waking up every day and putting on my leg is so hard, but I keep doing it because I want my three daughters to see me as a hero again.

In 2013, Tanya Haumann was offered a choice between a breast reduction of her double G size breasts that were causing her backache and migraines or an overseas holiday by her then fiancé and now husband Gideon. She chose to reduce her breasts.

Gordon quoted R36000, but when he saw her, he increased this to R51500, saying she was too big. After surgery, her right breast didn’t resemble a breast anymore but just a fat lump of skin that has no nipple with a long, red scar running from top to bottom. Her left breast was also scarred and has some skin hanging at the back.

“I’m so fearful. I cannot tell you how scared I am for anybody to touch my breasts.”

She sued Gordon and was awarded R750000 but has still not received a cent. When she last checked in 2014, it would cost her R110000 to reconstruct her one breast. She said she is still dealing with the results of the surgery.

“There are scars inside that don’t heal. I will never feel like a whole woman again. You can make yourself feel better but when I look in the mirror the scars run deep.”

Lawyer Gary Austin said he had more than 50 clients who have complained about Gordon.

US Elections: who is leading at the polls?

Another chance for parents to secure place for Grade 1, 8 learners

Alberton Doctors are concerned about their patients’ health

Countdown to Covid Vaccine in SA

FROM THE DESK OF THE PRESIDENT