Alberton News: Principal and Deputy from Bracken High in hot water over remarks about how a student dressed

A Group of parents from Bracken High in Alberton have lodged a complaint at the Department of Education after the Deputy principal made unsavoury remarks to a pupil about her dress code.

According to sources the Deputy Principal allegedly said that the way in which a pupil dressed meant that if anything happened to her, (being raped) it was her fault.

“With the onslaught of the COVID-19, we decided to introduce the wearing of Civvies to enable pupils to have their clothes washed regularly. While the idea was noble but in our rush, we neglected to define boundaries. This led to confusion and teachers applied rules from their perspective. We will be working at rectifying this oversight in consultation with interested parties.
On Friday, teachers had commented on pupils attire and pupils have indicated that they were offended by the comments that were made. A few pupils have emailed me and received responses. This morning, pupils staged a peaceful and well organised protest (and socially distanced, thank you) and I heard a number of concerns and received a letter of their concerns and suggestions which I hope we can address amicably. I also had the privilege of meeting and discussing with some calm, clear thinking and determined pupils throughout the day.” 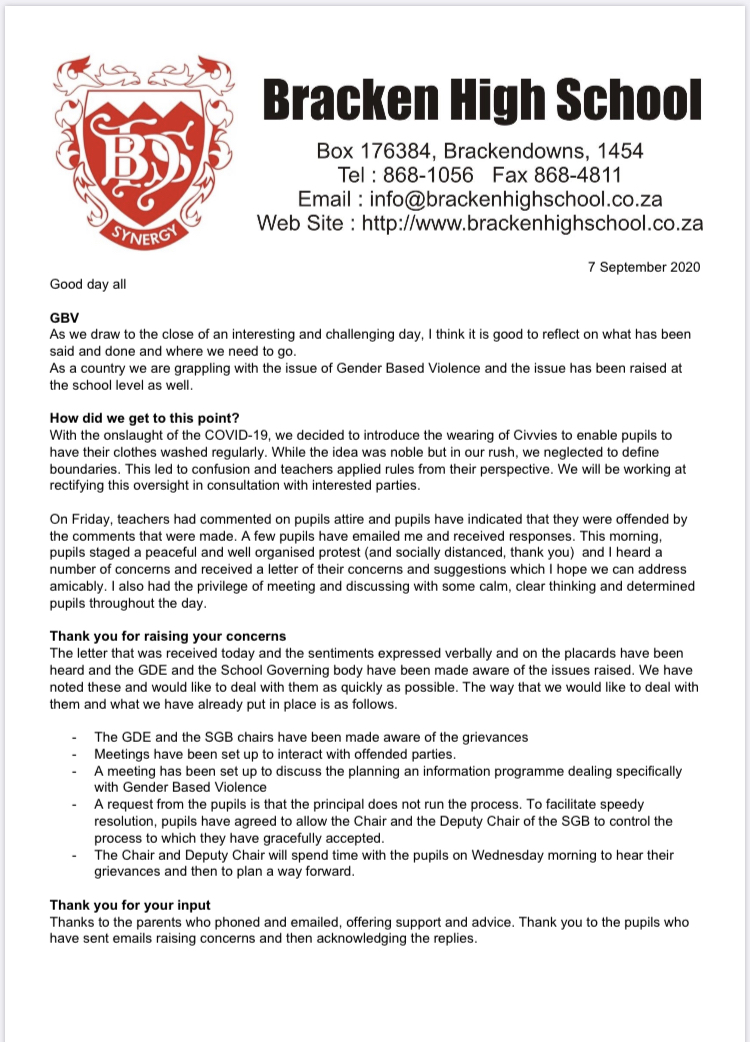 This incident caused the parents to start a protest on Tuesday to express their anger and frustrations over these comments.

A group of parents are currently in a meeting with the principal of Bracken High following the remarks.

Gauteng online application for Grades 1 and 8

GOVERNMENT: Cybercrimes Bill and rules around the messages you can send.

Guidelines to follow for domestic workers returning to work

Covid-19 News: New symptom to look out for – Covid toes.